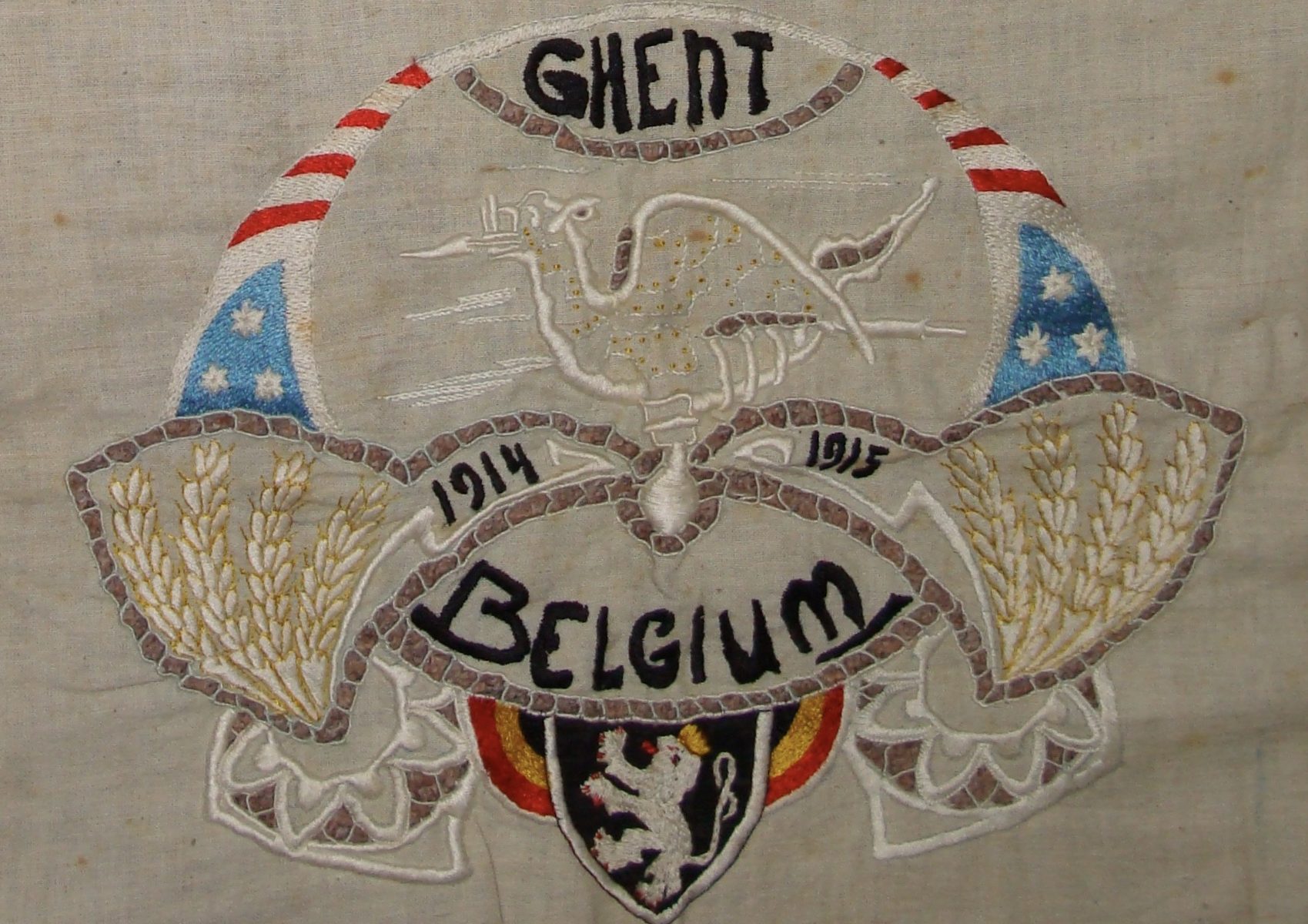 The aim of my research is, among other things, to unravel the mythical history of the origin of the decorated flour sacks in WWI. Decorated flour sacks in WWI are both embroidered, decorated with needlework and with lace, as though they were painted by artists. Flour sacks have been transformed into clothing.
Who had the idea of reusing the sacks and where and when did that start? Was it a Belgian initiative or did it happen on American suggestion?
To find answers to my questions, I systematically went through a number of Belgian newspapers and illustrated magazines from the end of 1914, beginning of 1915; these have been digitized and are available online.
I had already found some American publications before and combined them with the information from Belgium.
In my first of a series of four blogs, I have discussed the origin of reusing the flour sacks as clothing. 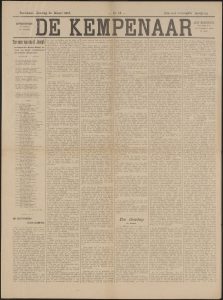 The earliest source discovered until now is a message in the newspaper “De Kempenaar” with a description of the decoration of flour sacks with embroidery, needlework and lace. In ornate words, the decorated flour sacks gave the opportunity for a patriotic “cri-de-coeur” from a journalist in Turnhout, province of Antwerp, under the headline: “The Germans in De Kempen”:
“While all sorts of necessities are coming from the billion-dollar country to help the Belgian population in pressure and distress, our feminine side has sought and found a means of expressing deep gratitude to the Americans with as much fine tact as generosity.
And look at the sacks in which American flour is sent to us and some of which bear the name of the world-famous billionaire Rockefeller, they have displayed their art in beautiful needle and embroidery, on which they picture the maps of Belgium, the province of Antwerp, flowers and figures have been worked out and embroidered, sometimes trimmed with fine real Turnhout edges and which will soon elicit an exclamations of astonishment and admiration in the new world, yes maybe will be sold at the price of hundreds or thousands of dollars.
After all, is it a memento of that small but brave nation, of those heroic Belgians who have fulfilled their patriotic duty so honorably and gloriously? … Is it the work of the mothers, of the sisters of those admirable soldiers, who now want to send a small but meaningful memento with their own art and own manual labor to the protectors of our people and our nation that will be received and preserved there in the large families like the relic of a heroic people, fighting for their rights, their freedom and independence??…”.
(De Kempenaar, March 21, 1915)

The second source is a photo in L’Actualité Illustrée of March 27, 1915. The photo with caption “La farine d’Amérique” (“The flour of America”) shows the shop window in which empty flour sacks are displayed. What does this photo reveal?
– the window of a bread bakery that advertises its “hygiène et propreté” and “pétrissage mécanique” (“hygiene and cleanliness” and “mechanical kneading”)
– the presentation of a series of empty flour sacks and many American flags, with a framed, perhaps embroidered flour sack in the center at the top.
All this as proof of the enthusiasm for the reception of the flour, the quality of the bread baked by it, the gratitude to “America” and a gesture of Belgian patriotism including indirect reproach to the German occupier.

Translation:
“April 26, 1915: … Mother embroiders Am sacks in my place…
April 28, 1915: … At school we embroider the am flour sacks … Nothing new under the sun (song of my youth) …”.
The girls were embroidering at (sewing) schools. They must have been bored at times, perhaps this is why this girl’s mother had put in the stitches for her. As the embroidery was performed as part of their education, the girls received no remuneration for their work.

4) May 1915: A letter from Opwijck (province of Flemish Brabant)
“OPWIJCK. From a few letters….
We are still well supplied with food: America takes care of everything. Long live America! We get wholemeal flour and flour every week and if we use a bit of farm flour, we eat the tastiest bread; …
We now show our gratitude to our benefactors, embroider empty flour sacks with tricolor drawings and inscription: “The grateful Opwijck to the United States”, and others. I make a ”milieu-de-table” and so everyone contributes something.
This is how people work in all villages and it seems that our work is being sold for dollars to the billionaires who want souvenirs of deeply ravaged Belgium. The proceeds are for us...”
(De Belgische Standaard (The Belgian Standard), May 7th, 1915).

There were reports in the newspaper about the sale of empty flour sacks.
“Sale of American sacks. – The sacks in which the flour of America comes to us have been sold for some time to the benefit of the “Comité National de Secours et d’Alimentation”. The sales take place on Avenue Anspach (Brussels), in the offices where the Red Star Line used to be located. The first sales days gave a result which no one expected. The sacks were then handed over to young girls who manufacture all kinds of very beautiful things from them, all kinds of war souvenirs or expressions of gratitude towards generous America that sent us those sacks filled with the flour that saved us from famine.” Het Vlaamsche Nieuws (Flemish News), May 29th, 1915)

A postcard in the collection of the Royal Library of Belgium (KBR) in Brussels shows the window of said building on the Avenue Anspach.

This image was on display at the “Food & War” exhibition “A culinary history of the Great War” in Brussels Museum of the Mill and Food in Evere from October 2015-August 2016. When the photo was taken is not mentioned, my estimate would be summer 1915. The shop window is filled with decorated flour sacks: “Sacs de farine Américains brodés et transformés vendus au Profit des Orphelins de la Guerre. (Embroidered and processed American flour sacks sold for the benefit of War Orphans) Marcovici editor, Bruxelles, 27, Av. Stephanie.” The head of the saleswoman is visible in the center of the image, next to the flour sack “Washington Flour”.

Translation:
(“Discrete Aid, Section D: Aid and Protection for Embroiderers (Work of American Sacks). This committee, which consists in particular of:
The ladies Baronne de Crombrugge, J. Feyerick, E. de Hemptinne, Vande Putte,
took the initiative to transform the flour sacks (with the marks of original factories) received from America into embroidered cushions and other artistic works.
Its headquarters are located at Marché aux Oiseaux, in Mr. Robert’s stores, which are made available to the section free of charge.
The sale is for the benefit of the Provincial Committee of Relief and the committee provides a salary to a certain number of workers.”) 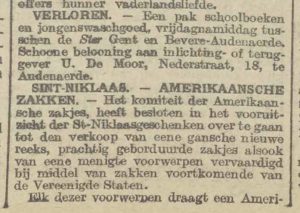 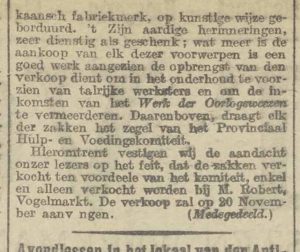 The Ghent committee thus identified working on flour sacks as providing employment to unemployed embroiderers and creating sales for charities such as those benefiting orphans and other war victims. Making objects to serve as Saint Nicolas (a local holiday akin to Christmas) gifts turned out to be important! Making gifts for American relief workers was not the aim … In November 1915 we read this announcement in several newspapers:

“The committee of American flour sacks has decided, with the prospect of St. Nicholas gifts, to sell a whole new series, beautifully embroidered sacks and a multitude of items made by means of sacks originating from the United States. Each of these items carries an American factory brand, artfully embroidered! A They are nice memories, very useful as a gift; what is more, the purchase of each of these objects is good work since the proceeds of the sale serve to provide for the maintenance of numerous workers and to increase the income of the “Work of the War Orphans. The sale will start on November 30.” (De Gentenaar. De landwacht, De kleine patriot. (The Land Guard, The Little Patriot, November 17, 1915)) [2]

Belgian women have taken the initiative with their commercial spirit to transform empty flour sacks into decorated flour sacks. In the spirit of North American donations, the flour sacks have indeed been reused, but in a surprisingly inventive manner. The approach of the Americans: “utility and thrift” – reusing flour sacks for making underwear and towels – has been deviated from due to Belgian generosity and the desire to create beauty, to make goods that people would like to buy as gifts and souvenirs.

Even empty and unprocessed, the flour sacks with logos from American and Canadian flour mills and texts from the donating people were so beautiful that they formed an attractive souvenir. Together with beautiful cushions, tea cozies, hangers, table runners, sacks decorated with colorful embroidery, elegant needlework and lace, the flour sacks generously filled the Belgian shop windows, sales exhibitions and raffles.

The proceeds were intended for charity. The two underlying motifs for the Belgian inhabitants were
– to provide employment and
– to raise money through sales to help war victims.
Donating the decorated flour sacks as souvenirs, memories of the war, and out of gratitude for food relief was the selling point, it contributed to getting financial support from the wealthy circles in Belgium and the “billionaires” in America.