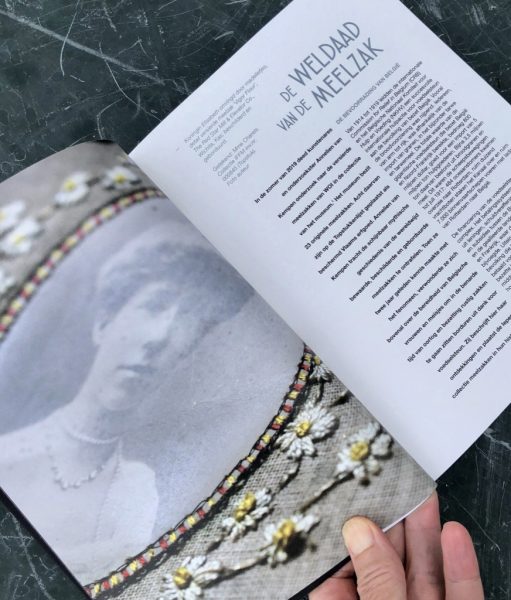 My article ” Flour sacks. The art of charity” has been published in the 2020 Yearbook of the In Flanders Fields Museum, Ypres!

In the summer of 2019, I conducted research into the decorated WWI flour sacks in the museum’s collection*). The museum possesses 23 original flour sacks, eight of those have been included in Flanders’ List of Masterpieces as unique heritage items.

In my article, I report in word and image on my discoveries and give historical context to the Ypres collection of flour sacks. The following topics are discussed: the supply of food to Belgium; the US charities with a graph of contributions by state; Madame Lalla Vandervelde, her journey through America and successful appeal for aid to the Belgians; examples of the Belgian charities with an infographic showing dozens of sales exhibitions of flour sacks held between 1915-1925; girls’ education in vocational schools with unique photos of their lessons; German censorship on decorated flour sacks.

My conclusion is: decorated flour sacks are the symbol of the many charities run and supported by Belgian women and girls during the occupation, besides the symbol of food aid and gratitude.

The IFFM Yearbook 2020 is beautifully designed by Manu Veracx. The original Dutch article with 17 color and 7 black and white illustrations, is fully translated in English by Marc Hutsebaut; it covers 9 pages.

You can order the IFFM Yearbook 2020 here.

*) Marc Dejonckheere interviewed me for VIFF Magazine, magazine of The Friends of the In Flanders Fields Museum; “The emotions of the flour sack” was published in September 2019. 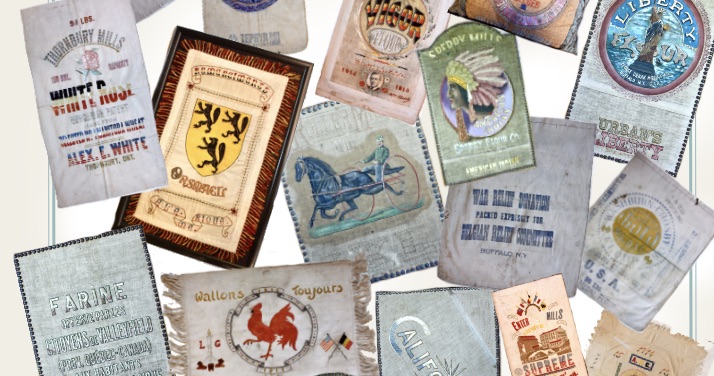 Ball games have always been around in history. How nice would it be if balls were to appear on decorated flour sacks from WWI: printed on the original flour sack in North America or embroidered/painted in Belgium?
I would like to write a blog about it.
The thought came to my mind because of Matthew Schaefer’s blog, “Opening Day, Baseball and Tough Times,” about Herbert Hoover’s involvement in baseball. It recently appeared on the blog of the Herbert Hoover Presidential Library in West Branch, Iowa, USA. Archivist Matthew Schaefer regularly publishes on “Hoover Heads”, blogs covering a wide variety of topics related to the life and work of the man who was director of the Commission for Relief in Belgium and later became the 31st President of the United States of America, Herbert Hoover, and his wife Lou Henry Hoover.
But since I have not yet found a ball on any flour sack, I would like to present another sport on a flour sack, namely the equestrian sport.

Trotting on a flour sack
The first “equestrian sack” I got to know was in the collection of the In Flanders Fields Museum (IFFM) in Ypres. It is part of a folding screen which consists of 8 panels with decorated flour sacks. One of the panels is the flour sack “Roller Mills IXL” with the image of harness racing: a fast trotting horse in front of a sulky with large wheels and a concentrated driver on it.
During my flour sack research at IFFM in June 2019, I was able to study the horse and driver on the folding screen in the Depotyze depot at Zonnebeekseweg.

The flour sack was first painted and colored. Then the embroidery was done: the contours of the horse along the neckline and some accents on the green uniform of the driver. The jacket has a double row of golden buttons, the crease of the pants and the headgear are accentuated. The details of his face are entertaining: black stitches form the eyes and a proud mustache!

The headgear most resembles the kepi of the Belgian ‘chasseur à pied’ or the ‘karabanier’.[1] Even a regimental number has been added with some black stitches.

The contours of the letters “Roller Mills” are embroidered in backstitch. The letters IXL are filled with stitches and “French buttons”. Underneath that is the word “FANCY”, also embroidered, but the letters have been cut in half because the panel’s nails are punched into the fabric at that location.

A beautiful flour sack, unfortunately without an indication of the origin of the mill, which has donated the sack filled with flour to Belgium.
Which mill sent this sack, where did the flour come from? After hours of unsuccessful online research and days thinking about a way to find out the name of the mill, I got an idea. Equestrian sport.

Horse racing
I remembered the Bulletin of the Art & History Museum (RMAH) in Brussels. In it, Professor Guy Delmarcel of UCLouvain published an interesting article about the museum’s collection of decorated flour sacks in 2013. [2] He described a flour sack depicting “horse racing” with inventory number Tx 2650. Appendix 1 to the article, the “List of American Flour Sacks in the RMAH” listed the state of Utah, brand name IXL, miller Central Milling Co. in the town of Logan.
Even without seeing a picture of the RMAH flour sack, I thought: “IXL in combination with horse racing: YES! that may well be the right combination, also for the flour sack in the IFFM folding screen!”

In February 2020 I was able to study the RMAH collection in Brussels for a day. I have indeed found the second equestrian sack, my assumption was correct.

Comparison
It is intriguing to compare the two harness racing sacks with my photos from Brussels and Ypres: the American print of the unprocessed flour sack next to the processed flour sack with Belgian painting and embroidery.
The horse races just as intense, the driver is just as concentrated. But there are differences: the large wheels of the sulky have gossamer spokes, the driver wears a jacket with a single row of ordinary buttons, the pants are without fold, on the head there is a cap with visor. The eyes look straight ahead and the mustache is a little less pleasing on the upper lip.
All in all, the Belgian adaptation has made a colorful spectacle of the trotting.

Logan, Utah
I have tried to study the history of Central Milling Co. in Logan, Utah, starting from the question: why is harness racing depicted on the flour sack of this mill?

The city of Logan is the largest city in Utah after the capital Salt Lake City. Utah is known for half the population being Mormons affiliated with the Church of Jesus Christ of Latter-day Saints. The large Logan Utah Temple defines Logan’s cityscape. “A History of Cache County” [3] gives an impression of the arrival of the settlers in this part of the US, life in Logan and the County Cache in the early 20th century.

Founded in 1867, Central Milling is one of the oldest companies in Utah still operating today. Central Milling will have emerged as a cooperative of farmers who had their grain milled together. The society of Mormon settlers tackled many businesses together, leading to successful businesses. Railways were also constructed, accelerating transportation of goods to other states and accelerating the economic development of the Cache County agricultural area. Central Milling became a leading producer of flour using the industrial roller mill system for grinding grain. The mill was located on the Logan River, which supplied hydropower to power the machines. During WWI, the company was owned by 50 shareholders, the founders of the company. In 1917, Herbert R. Weston of Idaho bought out all 50 shareholders and the Weston family then ran the company for 80 years. The current mill has merged with Gilt Edge Mills and focuses on the production of organic flour products based on the philosophy of cooperation between farmers, millers and bakeries.

Harness racing
Baseball and horse racing were the primary outdoor sports for the people who settled in Utah.[4] They paid a lot of attention to the breeding and training of racehorses. A good half mile racetrack was laid out in Logan at the “Church Farm” in 1881, the public came from many areas around Logan and had a great time during horseraces and harness races, especially on Sundays and public holidays. The MendonUtah.net website mentions by name the successful stallions, geldings and mares and their owners from that era.
Through this information the link between harness racing and the flour sacks of Central Milling Co. is clearly established. But we will have to stay in the dark with regards to the names of the horse and the owner.

Lou Henry Hoover
Matthew Schaefer informed me that Herbert Hoover was not a fan of horses, he rode infrequently. On the other hand, his wife Lou Henry Hoover loved horses and was a good rider.

Matthew added that he had recently attended the opening of the exhibit “The Pull of Horses” at the University of Iowa Library in Iowa City.

To him it was enlightening to be reminded of the ubiquity of horses 100 years ago.
I myself received this feeling of enlightenment through the study of trotting horses on the decorated flour sacks of WWI in the collections of IFFM in Ypres and RMAH in Brussels.

Featured image:
Part of a digital photo collage of the collection of decorated flour sacks from WWI in the In Flanders Fields Museum, Ypres. Photo collage: Tamara Raats, 2020.

Many thanks to:
– Els de Roo of the In Flanders Fields Museum, Ypres. She received me as the first visiting researcher in Depotyze to research the folding screen with eight panels of decorated flour sacks, including panel ‘IXL’;
– Dr. Ingrid De Meûter and Ria Cooreman of the Royal Art & History Museum in Brussels. They gave me the opportunity to study the museum’s collection of flour sacks from WWI, the so-called ‘Errera Collection’, which includes the unprocessed flour sack ‘IXL, Central Milling Co.’.

[1] My sincere thanks to Rob Troubleyn for the information about the kepi of the Belgian “chasseurs à pied” and the “karabaniers”.

He corrected my earlier interpretation, the kepi of the French “chasseur forestier”, 1884 model, see the Dossiers/Files In Flanders Fields Museum 9, From Tradition to Protection. French military headgear in the First World War. Exhibition prepared by Philippe Oosterlinck i.c.w. Dominiek Dendooven 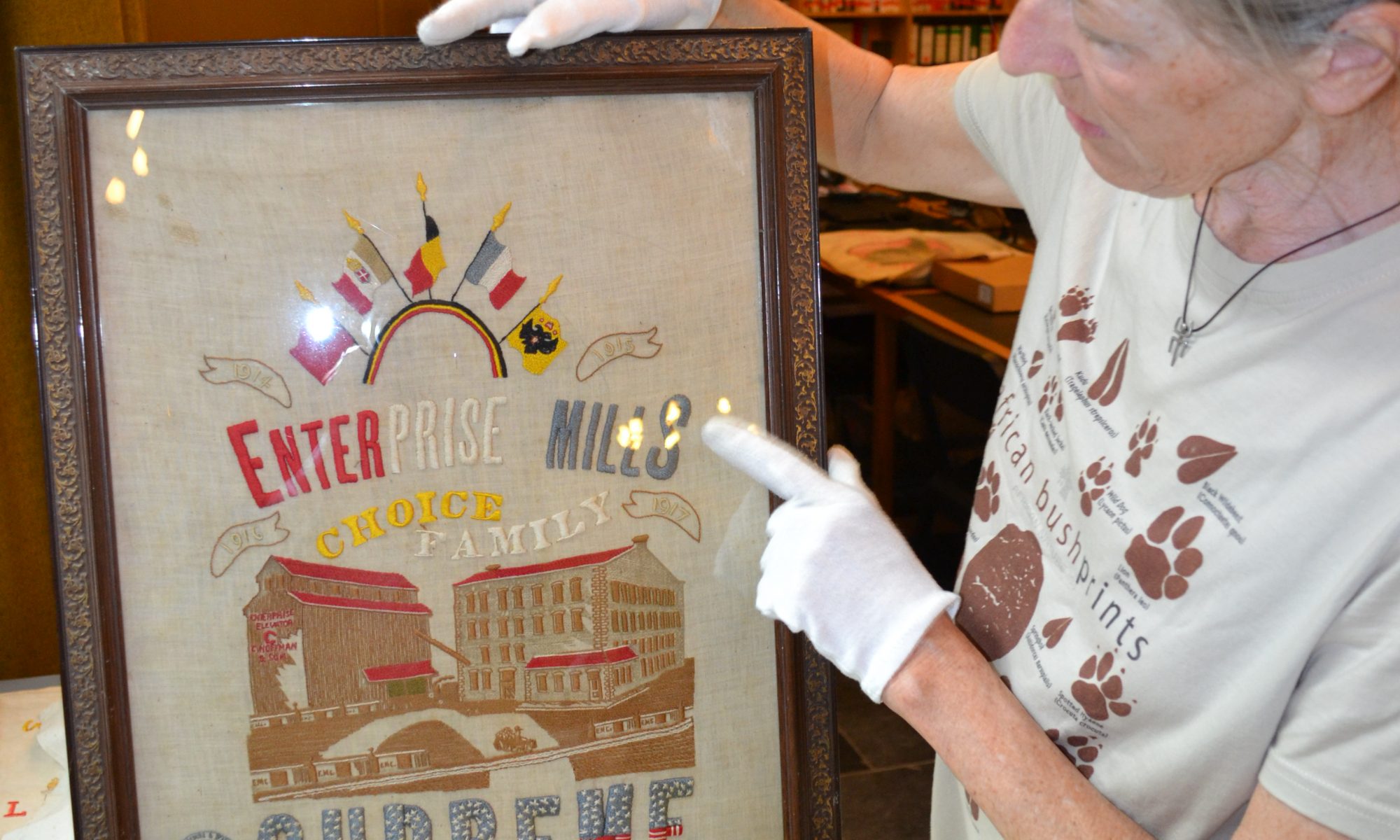 In June 2019 I did research in the Ypres Salient, Belgium.
The Friends of the In Flanders Fields Museum published this interview in VIFF Magazine no. 70, 2019-3: 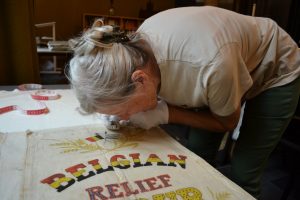 “Last summer, artist and researcher Annelien van Kempen, hailing from Voorburg in the Netherlands, did research on the collection of the In Flanders Fields Museum in Ypres, focusing on the decorated flour sacks of Herbert Hoovers Commission for Relief in Belgium with support of the Koen Koch Foundation.
The Koen Koch Foundation raises funds through membership fees and donations to the Friends of the In Flanders Fields Museum to support students and trainees with their studies on WWI in the Ypres Salient or on the IFFM Collection. 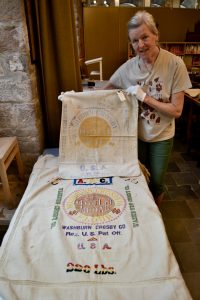 The sacks of flour from the USA and Canada were intended as food aid to occupied Belgium in World War I. Generally, you do not assign a backbone or feelings to a flour sack. The Belgian seamstresses, embroiderers, lace workers and painters who artfully worked on the sacks, however, testified to enthusiasm, creativity and ingenuity, as well as patriotism and deep gratitude towards the generous donors. The IFFM already houses a number of masterpieces, which further fueled Annelien van Kempen’s passion for her research subject.”

Interview and photos by Marc Dejonckheere.

You can read the interview here.

My article ” Flour sacks. The art of charity” has been published in the 2020 Yearbook of the In Flanders Fields Museum, Ypres. In the article I describe my discoveries and put Ypres’ collection of flour sacks in their historical context.  Please read my blog here.