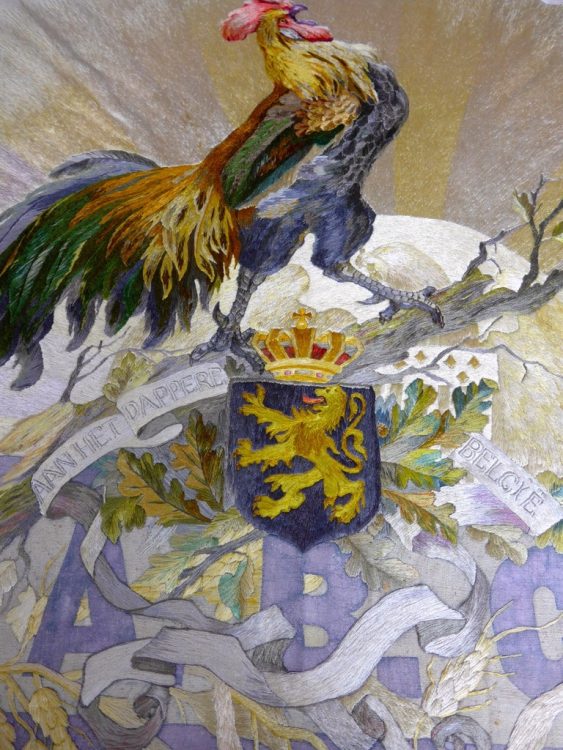 A decorated WWI flour sack designed by Belgian artist Piet Van Engelen is part of the collection of the Herbert Hoover Presidential Library and Museum in West Branch, Iowa, United States.
The work by Van Engelen – a powerful symbol of a rooster on an oak branch, claiming its territory, guarding the crowned shield of Belgium, while behind him the sun rises accompanied by a bald eagle – served as a pattern for embroidery.
This resulted in a decorated flour sack of a special nature: the flagship of the decorated flour sacks.

The library is the building where archival material of the former president is stored. The museum tells the story of the president’s life and the time in which he governed. The library is located on the Herbert Hoover National Historic Site in his hometown of West Branch, Iowa, which houses his birthplace and burials of both Herbert Hoover and his wife Lou Henry Hoover. The HHPL was established under the Presidential Libraries Act of 1955 and is administered by the National Archives and Records Administration.
Herbert Hoover and the Commission for Relief in Belgium (CRB) archives and memorabilia (souvenir gifts, including the decorated flour sacks) were originally kept at the Hoover Institution Archives (HIA) at Stanford University, Palo Alto, California. With the opening of HHPL, Herbert Hoover had taken the opportunity to transfer some of his memorabilia to West Branch.

I myself have not been there yet. My visit, made possible in part by a Travel Grant awarded by the Hoover Presidential Foundation, was scheduled for April 2020, but had to be postponed due to travel restrictions and library and museum closures since March 14, 2020 due to the coronavirus.

Piet Van Engelen (Lier 12.05.1863 – Antwerp 17.10.1924) is educated in Wallonia and in Flanders; he studied at the Académie Royale des Beaux-Arts in Liège with P. Drion and the Academy of Fine Arts of Antwerp with Charles Verlat. During the Great War he lived in Antwerp. From 1897 he became a teacher at the Academy in Antwerp.
Piet Van Engelen mainly focused on animal painting.

Decorated flour sack HHPL inv. no. 62.4.447
The representation on the flour sack is a powerful symbol of the dawn. A rooster in colorful plumage towers high on the branch of an oak tree, a symbol of strength, and crows its morning greeting with its beak spread open. The crowned shield of Belgium is central between its legs. A ribbon flows between the oak leaves bearing the words “To Brave Belgium”.

The original print on the sack, the three letters “A.B.C.” in a rectangular frame, are interlaced with ripe stalks of grain.

The sun rises in golden yellow behind the composition. On close inspection, the viewer sees the bald eagle, a stalk of grain in its beak, with spread wings and American shield, rising up in the rising sun.

At the top right of the canvas a “scroll” with text can be seen. The text is a tribute to Herbert C. Hoover, director of the CRB, from the Ouvroir d’Anvers, Antwerp:
‘Hommage de reconnaissance
Monsieur Herbert C. Hoover
Chairman of the Commission for Relief in Belgium
Ouvroir d’Anvers 1916’.
This part could have been added later, because it gives the impression that it is not an essential part of the composition of Van Engelen’s design.

At the bottom left is the signature “Piet van Engelen, A. 1916” in black ink.
I presume the capital letter “A” stands for Antwerp.

The surprise of the decorated flour sack
From a distance, such as in this photo, Van Engelen’s flour sack looks like a painting, having been brushed on canvas. The surprise is that the image was actually embroidered, threaded through the cloth with needle and thread, executed by one or a few experienced and professional embroiderers!

Usually, professional embroiderers worked on embroidery with religious subjects, on banners, on furniture and clothing for the highest classes.

Guy Delmarcel described the flour sack in 2013 as follows: “... a beautifully embroidered allegory, a “Belgian” rooster with the inscription “To brave Belgium“, which according to a French text at the top right was commissioned by the Antwerp department of the CSA. The work is signed in pen by Piet Van Engelen (1863-1924), a meritorious animal painter from Lier, who provided the design (inv. 62-4-447; fig. 21).” [1]

How did Van Engelen find embroiderers to execute his design? We can learn more from an American primary source.

Charlotte Kellogg, née Hoffman (Grand Island, Nebraska, May 21, 1874 – Monterey, California, May 8, 1960), CRB delegate – unique as the only woman – stayed in Belgium between July and November 1916. She was an eyewitness to the creation of Piet van Engelen’s artwork. She described her visit to the Ouvroir d’Anvers in Antwerp in her book “Women of Belgium”. [2]
“In one whole section the girls do nothing but embroider our American flour sacks. Artists draw designs to represent the gratitude of Belgium to the United States. The one on the easel as we passed through, represented the lion and the cock of Belgium guarding the crown of the king, while the sun—-the great American eagle rises in the East.”

Piet van Engelen did not have to look for embroiderers as performers of his work; on the contrary, he was commissioned to make designs for embroidery, to be executed by embroiderers from the Ouvroir d’Anvers. His design was on the easel during Kellogg’s visit in the summer of 1916.
The pattern of the design has been drawn on the flour sack, the drawing lines are still visible in some places. The yarns were selected, the colors of the yarns were chosen according to the colors of the design. The embroiderer went to work with precise instructions on which embroidery stitches to use. During the creation process there would have been regular consultation about the colors and the direction of the stitches.

Rooster
Since the first encounter with images of Piet van Engelen’s decorated flour sack, I have wondered which interpretation he wanted to provide with his use of the “Belgian rooster”. Was the rooster in its scene an allegory or a national symbol?

My impression is that Van Engelen painted an allegory of a “rooster on an oak branch at dawn”. He was an avid painter of the animals that surrounded people, present in the house and garden, chickens and roosters in particular.

Roosters have a strong natural territorial drive. They puff up their chests and defend the chickens against much bigger enemies. The rooster claims its territory by crowing. The artist knew the great power of the symbol of the rooster better than anyone else. Moreover, in the image of the rooster, Van Engelen must have felt free in his expression, he knew the animal, it was his own, he could put a range of colors and shine in the plumage. He placed the rooster proudly on the thick branch of an oak, the oak leaves colorfully executed. The oak added meaning to the allegory as a symbol of protection, fortitude, courage and strength.
Van Engelen sealed his allegory with the dedication written on the ribbon: “To brave Belgium”.

It does not seem plausible that Van Engelen depicted the rooster as a national symbol for Belgium. He was a Flemish artist who made designs for the Ouvroir in Antwerp, which was under the protection of the Antwerp provincial relief committee, the Comité provincial de Secours et d’Alimentation.
Flanders has a flag with a black lion, on the shield of Belgium is a climbing lion in gold. Wallonia indeed has a flag with a rooster. As a skilled painter of animal figures, Van Engelen would have depicted a lion rather than a rooster, if it were national symbolism.

Other designers also used the rooster in their work in the period ’14-18, for example this design in needlepoint lace.

Milling company
Which mill has filled the sack with flour and had it shipped from the U.S. to Belgium?
Unfortunately, this is not (yet) known. There is no clearly printed name of the mill; in one photo I think I see a glimpse of large capital letters flashing on the underside of the canvas. Hopefully they can be used to clarify the origins of the sack in the future.

That abbreviation “A.B.C.” has a meaning that continues to puzzle me. Numerous flour sacks are printed with “A.B.C.”. Even more flour sacks have been stamped before leaving the U.S. with the letters “A.B.C.”.

I suspected the acronym “American Belgian Commission” or “American Belgian Consul”. I have not been able to find evidence for it.
The first option I did find was the abbreviation “A.B.C.” for “American Bakers Council”, an American quality certificate for flour supplied to bakeries by the mills.
However, this seems unlikely as boxes containing other types of U.S. relief supplies have also been stamped “A.B.C.”.

A second option is therefore the abbreviation “A.B.C.” for “American Belgian relief Committee“. The Oregon Daily Journal in Portland, Oregon, made this statement on January 31, 1915: The Oregon Belgian Relief Committee and its Advisory Board had finished their work, reporting their work to the Governor of the State of Oregon. Afterwards, they still received gifts and would forward them to what they called the “American Belgian relief committee” (“A.B.C.”?!) in New York.

Option three was suggested to me by Evelyn McMillan: the Annan, Burg & Company mill in St. Louis, Missouri ran “A.B.C.” in their logo, the abbreviation of the company name in advertisements in the Northwestern Miller between 1910 and 1915. However, this logo cannot sufficiently explain the prints “A.B.C.” on flour sacks from other mills or those on other relief products.

But, alas, the meaning of the three letters is unknown!?!

Besides Piet Van Engelen, other members of the Van Engelen family were also at the forefront of Antwerp cultural life. Elder brother Louis Van Engelen (Lier 17.01.1856 – Antwerp 14.10.1941) was a painter, he completed landscapes, animals, portraits and genre scenes and often worked in large format.
Museum Vleeshuis in Antwerp is currently showing his painting “Sunday Afternoon on Sint-Anneke“, 1887. He has depicted his brother Piet in the middle of the company in the painting.

Grandfather François Joseph Van Engelen (1785-1853) had founded a workshop for brass instruments in Lier in 1813. The studio grew into perhaps the largest Belgian producer of these musical instruments. Part of the contents of the old workshops are part of a permanent installation in the basement of Museum Vleeshuis.

Piet Van Engelen’s decorated flour sack “Rooster on an oak branch at dawn” in the collection of the Herbert Hoover Presidential Library and Museum is a unique work of art in both design and execution, created in the Ouvroir of Antwerp, by experienced and professional embroiderers. It is a powerful allegory. It has been dedicated to Herbert C. Hoover, director of the Commission for Relief in Belgium.

We can speak of “the flagship of the decorated flour sacks”.

*) Addition courtesy of Evelyn McMillan:
Mrs. Emily Price Post (1872-1960) was a prominent New York society woman in the early 1900s. In 1922, at the age of 50, she published the book ‘Etiquette’ about manners and etiquette under het author’s name Emily Post, making it famous to this day! See the ‘Emily Post Institute‘. To my Dutch readers: she was the American Amy Groskamp-ten Have from ‘Hoe hoort het eigenlijk’, but her book did not appear until 1939.

Thanks to:
– Marcus Eckhardt, Curator of Herbert Hoover Presidential Library and Museum;
– Evelyn McMillan; Mauro Callens and Audrey Magniette; they provided me with photos they took during a visit to HHPL;
– Hubert Bovens for the biographical research of the artists.