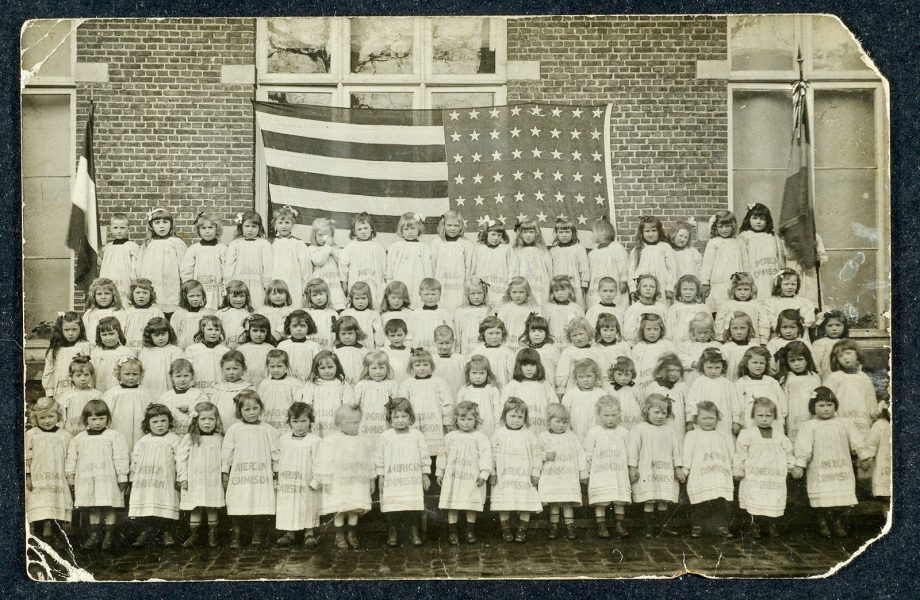 Who had the idea of reusing these bags and where and when did that start? Was it a Belgian initiative or did it happen due to American suggestion?

I had already found some American publications before and combined them with the information from Belgium.

I have split my analysis and findings into four parts:

In this blog I will discuss the origin of the reuse of Flour Bags as clothing. Two primary sources, one Belgian from early 1915 and one American from late 1914, bear witness to this.

The earliest Belgian source with information that I have found so far is an article about Madame Vandervelde. Her maiden name was Charlotte ‘Lalla’ Speyer, British by birth but from German parents, she was married in 1901 to her second husband, the Belgian Minister of State, Emile Vandervelde. The couple divorced immediately after WWI. [1]

Since October 1914, Madame Vandervelde had been in the United States to ask for help for the Belgian population in need. In Buffalo, New York, she gave a lecture and received 10,000 bags of flour as a gift. The bags were made of fine cotton and intended for reuse.

Translation: “In Buffalo, manufacturers have donated to her a ship with 10,000 bags of flour – bags made of fine canvas and cloth, so that these can afterwards be used and transformed into clothing and towels for the inhabitants…. “

a) the unprocessed Flour Bag on a photo of a Flour Bags-collage, provided to me by the In Flanders Fields Museum (IFFM), Ypres, with the text: “War Relief Donation Flour from Madame Vandervelde Fund – Belgian Relief Fund, Buffalo, N.Y. U.S.A. 49 Lbs.”[2]

b) the decorated Flour Bag, which I see online at the ‘Ieperse Collecties’ (Ypres Collections). Object number IFF 003008 is an “Embroidered and painted Flour Bag attached on a stretcher with the text “War Relief Donation – Flour 1914-1915 – from Madame Vandervelde Fund “. At the top the portrait of Emile Vandervelde, Minister of State of Belgium.” 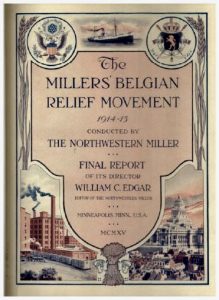 The earliest American source on the reuse of Flour Bags as clothing comes from Mr. William C. Edgar, editor-in-chief of the American newspaper “The Northwestern Miller” in Minneapolis, Minnesota. On November 4, 1914, he started the aid campaign “The Miller’s Relief Movement”. [3] The newspaper, a trade magazine for grain millers, made a request to subscribers and advertisers, in particular the flour mills, to donate flour for Belgium’s aid. The quality of the flour was specified in detail and the packaging had to meet the following conditions: cotton bags, sturdy for transport, dimensions suitable for handling by one person and last but not least “suitable for reuse“:

“Instructions were issued at the same time for packing the flour. These stipulated that a strong forty-nine pound cotton sack be used. This was for three reasons: the size of the package would be convenient for individual handling in the ultimate distribution; the use of cotton would, to a certain extent, help the then depressed cotton market, and finally and most important, after the flour was eaten, the empty cotton sack could be used by the housewife for an undergarment, the package thus providing both food and clothing. ‘(Final Report: The Miller’s Belgian Relief Movement 1914-1915, p. 9). [4]

The motive for reuse was widely used among the American female population. Reuse of cotton bags had already been established for decades and earlier. Cotton was a product of the country, bags were usable pieces of cotton. It provided the sparing housewife with simple items of clothing for free or for a low price. After good washing, the seamstresses cut the pattern of the clothes out of the bags and mainly made undergarments for their own family. After the First World War, the reuse of cotton bags developed further in the US from the 1920s.

During the depression in the 1930s, the Americans protected their distressed cotton industry, reusing cotton bags was a sign of frugality and also a patriotic duty. Product development and marketing efforts by bag suppliers resulted in washable prints, washable labels and finally colorful, fashionable and hip prints on the bags. In the 40s and 50s it was particularly fashionable to wear garments made from bags. A true “Feedsack” cult prevailed among rural women to sew clothes from used cotton bags that had served as packages of chicken feed, flour, sugar and rice for the entire family. [5]

The reuse of flour bags into clothing would have been taken up by Belgian women’s organizations under the protection of the Comité National de Secours et d’Alimentation, as soon as the relief work had properly started in January 1915.

It was typical of Belgian women that they not only made undergarments from the flour bags, but also cute, happy dresses for their children. In Heverlee, 80 children, mostly girls from around 4 to 6 years old, were photographed, dressed in Flour Sacks with the “American Commission” logo.

Mr. Robert Bruyninckx shared this black and white photo of 14 × 9 cm in the Europeana Collections under the title: “Group photo with children dressed in clothes made from bags of the American Commission for Relief in Belgium.”

A girl in New York was photographed in a “Belgian” dress with the “Sperry Flour” logo from California.

Although I have only found two primary sources to date, I nevertheless come to a provisional conclusion about the origin of the reuse of Flour Bags as clothing: this practice was taken up in Belgium at the suggestion of American relief workers. The Belgian women found the Flour Bags so special, they made, apart from undergarments, also nice dresses for their children.

[6] The group photo with the children in Heverlee in clothing from bags with the logo ‘American Commission’ is printed in the article by Ina Ruckebusch: ‘Belgische voedselschaarste en Amerikaanse voedselhulp tijdens WOI’ in: Patakon, tijdschrift voor bakerfgoed, (Belgian food scarcity and American food aid during WWI’ in: Patakon, Magazine about bakery heritage) 5 nr. 1 (2014) , p. 29.