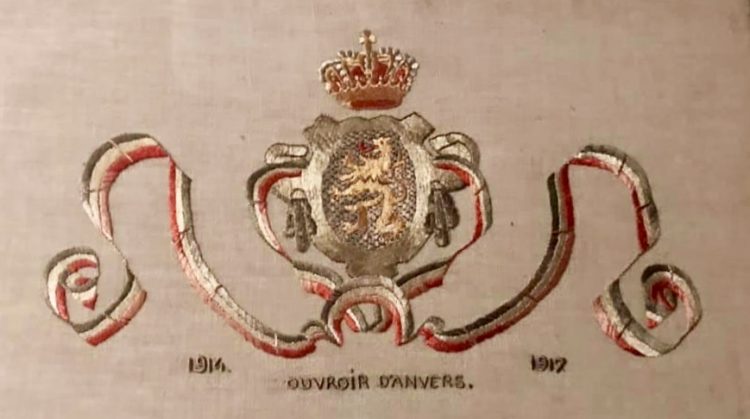 In the Facebook group “Lizerne Trench Art” (LTA), a lively theme night on “WWI flour sacks” was created as a result of the blog “The Ouvroir of Antwerp (1)“.

The Facebook group LTA resides in West Flanders, Belgium; they are a study group, a forum of friends, intended to exchange information/research about all forms of trench art, engraved shell casings, painted military equipment, embroidery, prisoner of war art, woodcarving, etc. from WWI until now.

On Friday evening, October 30th, 2020, I asked the members of the group if they knew about decorated WWI flour sacks that read “Ouvroir d’Anvers”. I immediately received a positive response from Ingo Luypaert.

As it turns out, Ingo Luypaert owns a beautiful embroidered flour sack “American Commission”.
The flour sack is inlaid in a wooden tray covered with glass.
The embroidery shows the Belgian coat of arms with the standing lion, above it a golden crown.

The heraldry is surrounded by “arabesques”: rhythmic patterns, repetitive movement lines, executed in the embroidery as an elegant pleated ribbon in the colors red, yellow, black with the text “Ouvroir d’Anvers 1914-1917” underneath. The silk threads make the embroidery shine.

The tray may have been exhibited and purchased in March 1916 to contribute to charity. Two newspapers published outside Belgium reported on an exhibition in Antwerp in the halls of the Harmonie Maatschappij, the building where the Ouvroir was located.

In Antwerp and Brussels, exhibitions were set up for “flour sacks” for a few days.
These original exhibitions are the result of the intention of the Belgian women who for some time now have embellished with embroidery some of the sacks in which the flour, delivered by the American relief organizations, arrives in occupied Belgium.
Among the most successful and most admired decorations were noted: the Belgian and American banners surrounded by ornate arabesques; …

The Germans inspected the rooms of the Harmonie Maatschappij, obviously uncomfortable with the fact that the starvation of Belgium under German rule and the protective actions of a neutral country should become a matter of public disclosure. They apply “censorship” to the sacks and ordered several ones they deemed too patriotic to be removed.”
(De stem uit België (The voice from Belgium), March 31, 1916; De Belgische standaard (The Belgian standard), April 8, 1916)

My thanks go to the Lizerne Trench Art-Facebook group, in particular to Ingo Luypaert.
Through his beautiful embroidered flour sack “American Commission”, the work of the girls and women in the Ouvroir of Antwerp during the occupation of 14-18 came back to life.

I look forward to the discovery of more decorated flour sacks with the text ‘Ouvroir d’Anvers’!

Recommended reading:
* My article “De weldaad van de meelzak/Flour sacks. The art of charity” has been published in the 2020 Yearbook of the In Flanders Fields Museum, Ypres.
You’ll find the article in Dutch: p. 4-25; in English: p. 123-131.

* Marc Dejonckheere interviewed me for VIFF Magazine, magazine of The Friends of the In Flanders Fields Museum; “The emotions of the flour sack” was published in September 2019.
You can read the article here.