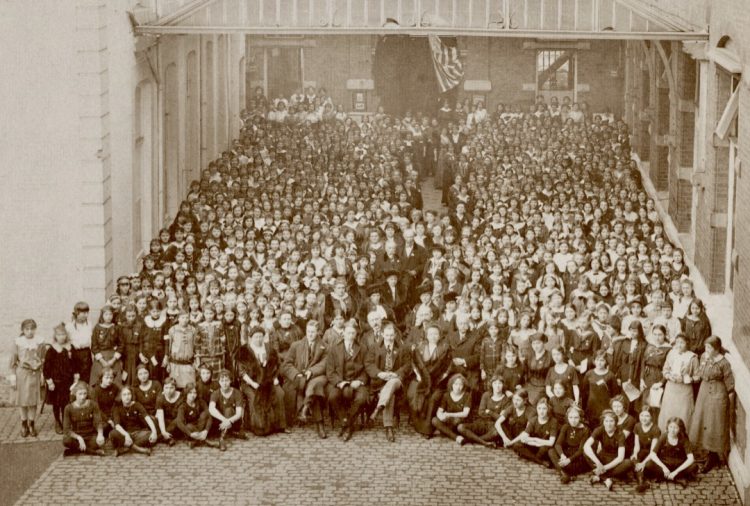 In early September 2021 I was finally able to go on another Flour Sack Trip to Belgium! I visited the city of Liège where I studied more than thirty decorated flour sacks at Musée de la Vie wallonne. I enjoyed speaking to the museum staff and visiting the depot, so I could photograph the flour sack embroideries in detail. Musée de la Vie wallonne (MVW) preserves an interesting collection of decorated flour sacks. An important donor, as early as 1919, was the Welsch family.

Pupils of the girls’ school Ecole Moyenne Professionnelle in Liège have decorated the flour sacks in 1915. Three of these flour sacks have been signed by the student who decorated them: Nelly Sasserath, Lucy Jossa, Thérèse Foidart, and the name of the school Ecole Moyenne de Liège. The girls were advanced students, at sixteen and seventeen years old.

The origins of the twelve flour sacks

Where did the twelve flour sacks originally come from?

How were the full sacks of flour transported?

The transportation went overland by train to ports on the east or west coast of the United States. From the ports, steamships transported the loads of flour sacks to Rotterdam, The Netherlands.

In Rotterdam, the sacks of flour were transshipped into barges and transported to Liège via the Meuse River (period January-April 1915). 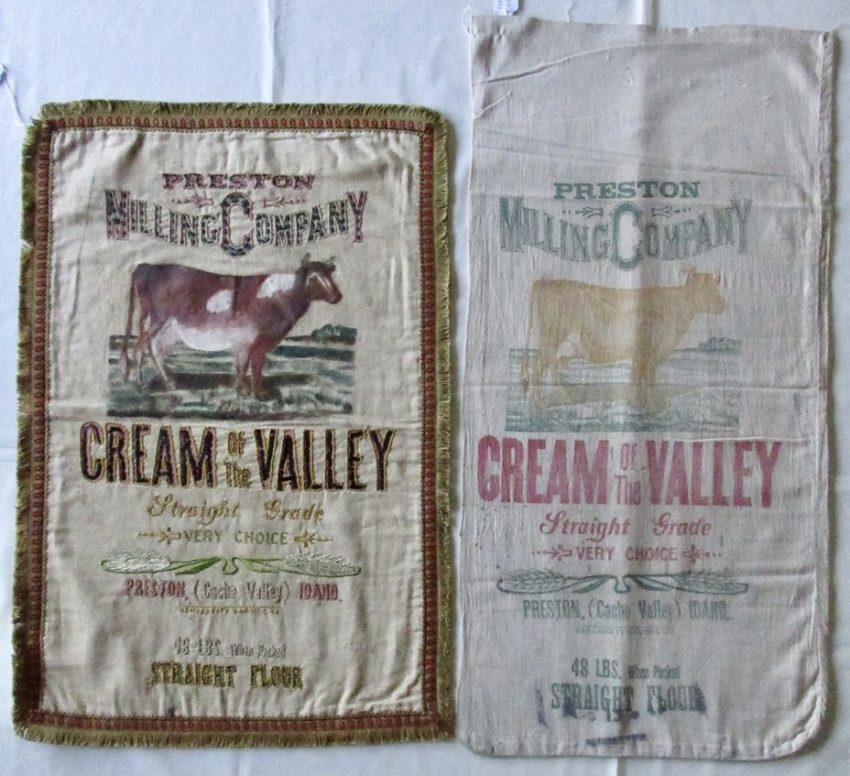 1 Cream of the Valley, tablecloth; painted, embroidered, trim along the edge with band and fringe. 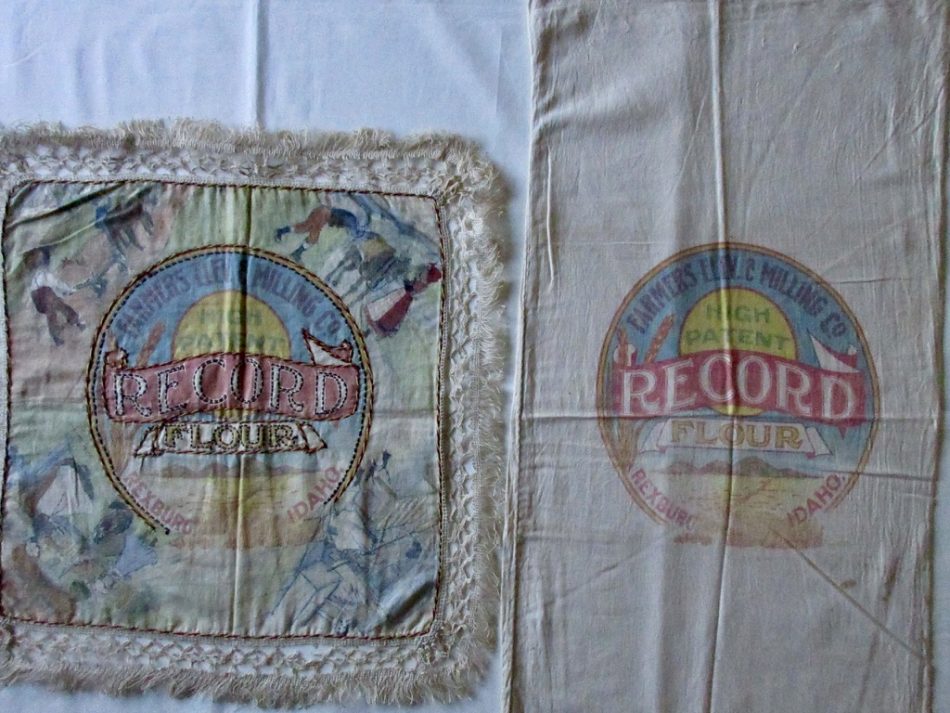 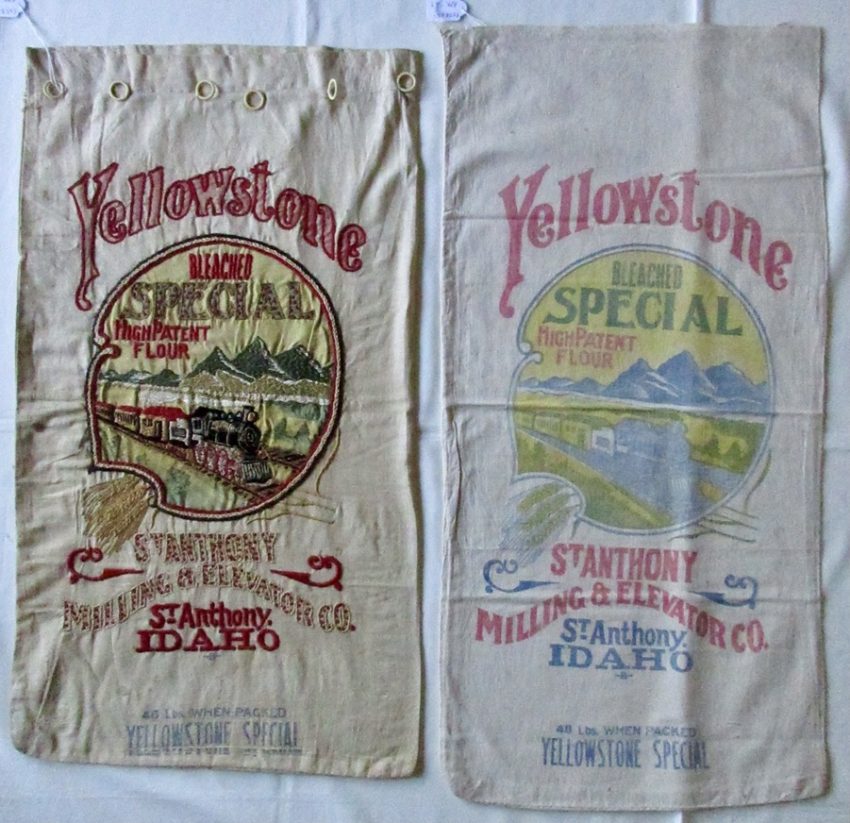 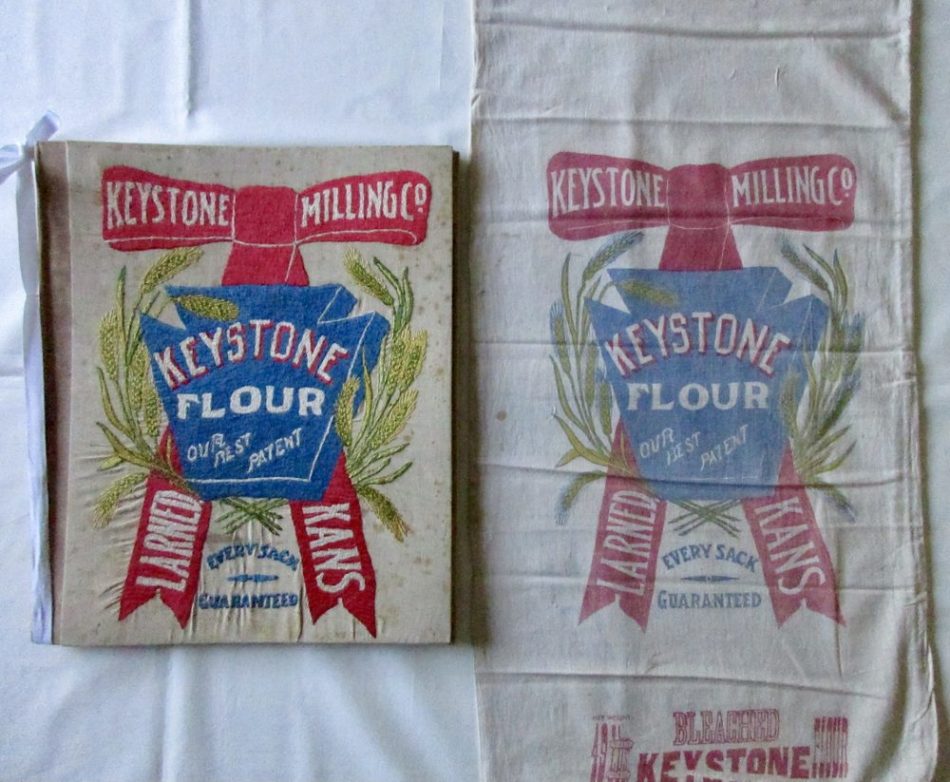 4 Keystone, “sous-main”, desk pad with posters from the Sacs Américains sales exhibition in Liège from November 20 till December 26, 1915. 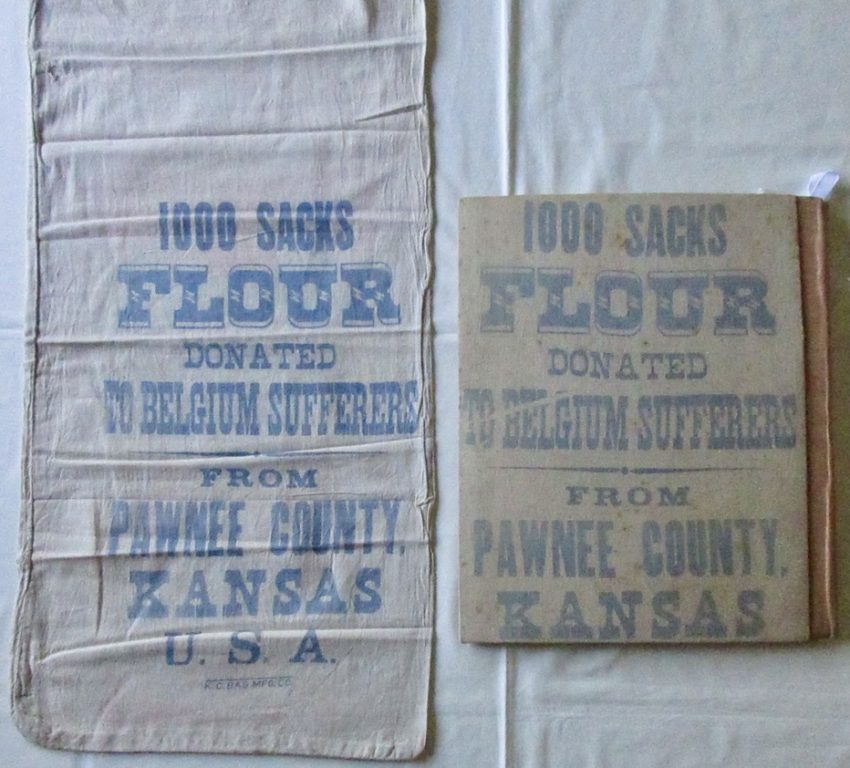 The reverse of the original flour sack is printed with the text “1000 sacks of Flour donated to Belgium Sufferers from Pawnee County, Kansas, USA”. This text is on the back of the desk pad. 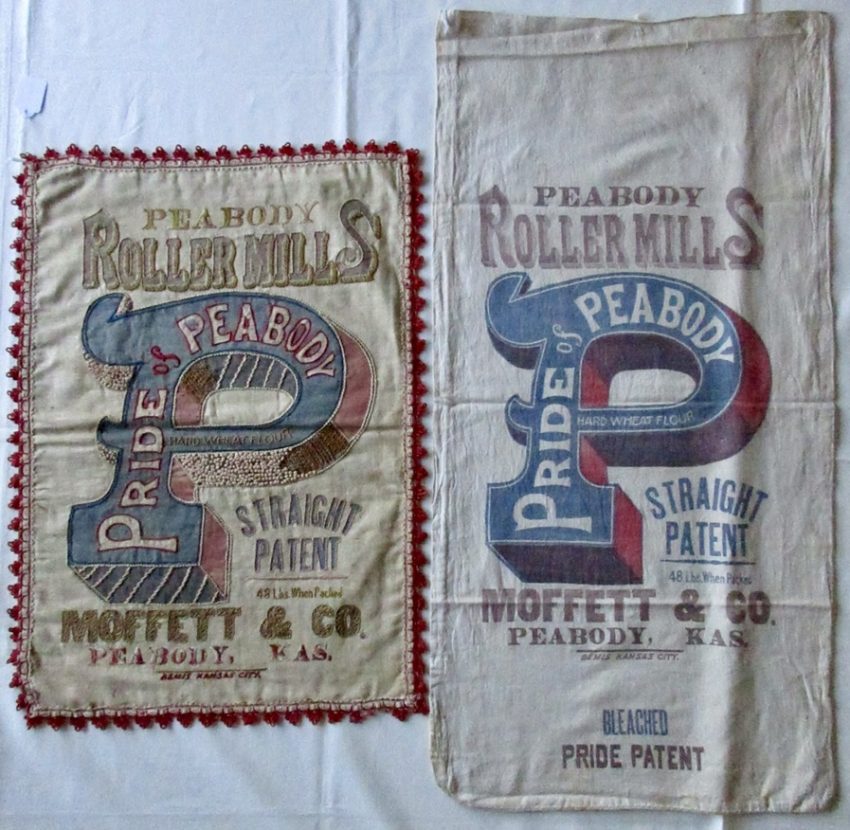 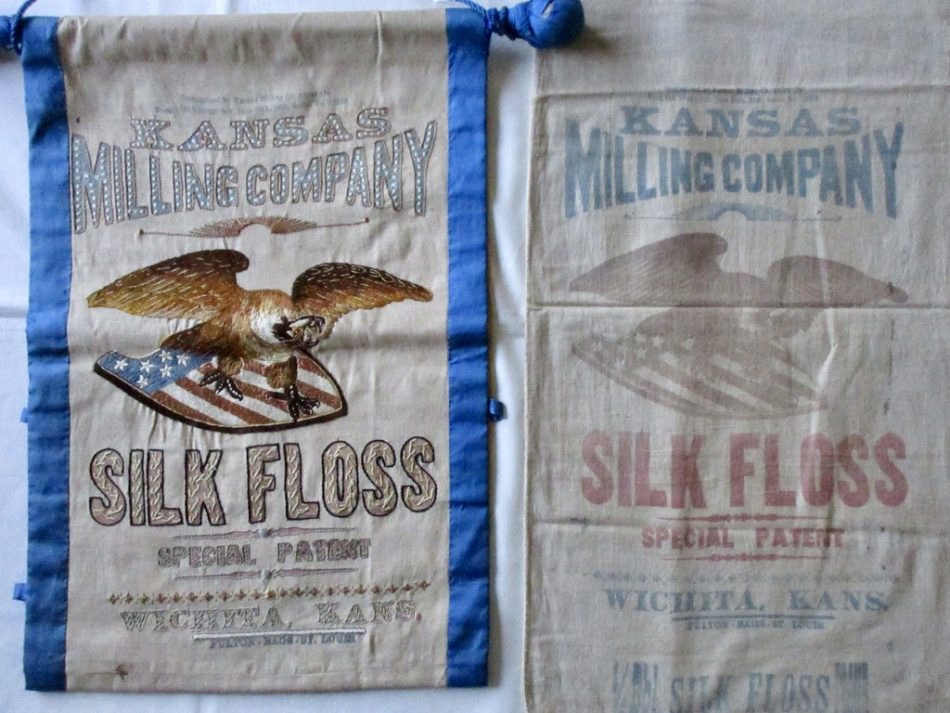 6 Silk Floss, hanging folder for newspapers; embroidered, sewn with blue fabric on sides and back. 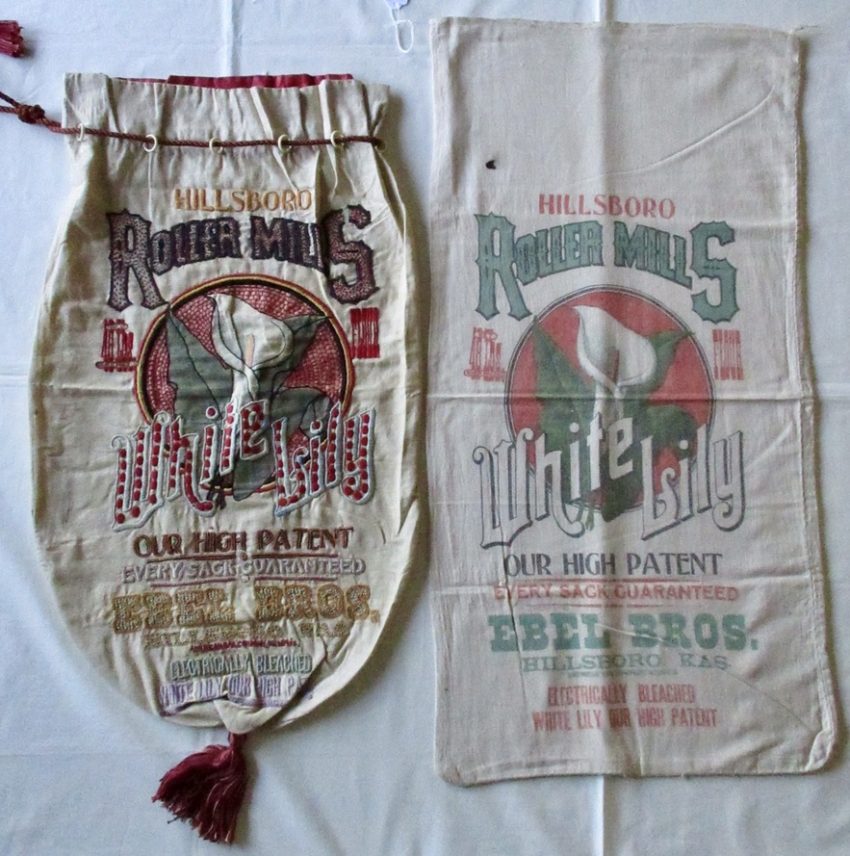 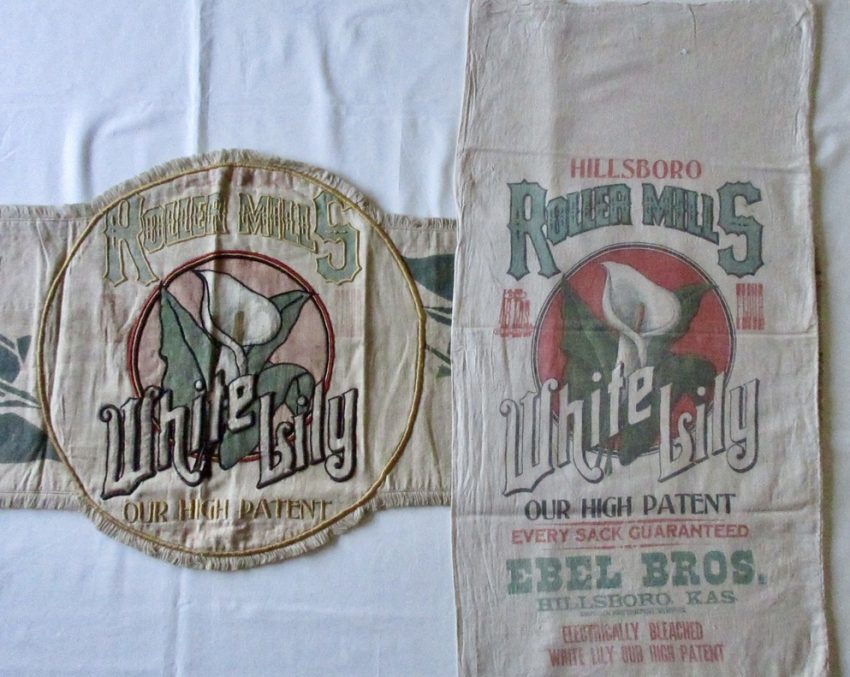 8 White Lily, table runner; art deco motifs are stamped or worked with template on the cloth, embroidered, back is lined, fringe around edges. 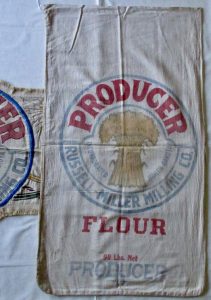 9 Producer, table runner; art deco motifs are stamped or worked with template on the cloth, embroidered, back is lined, fringe around edges. 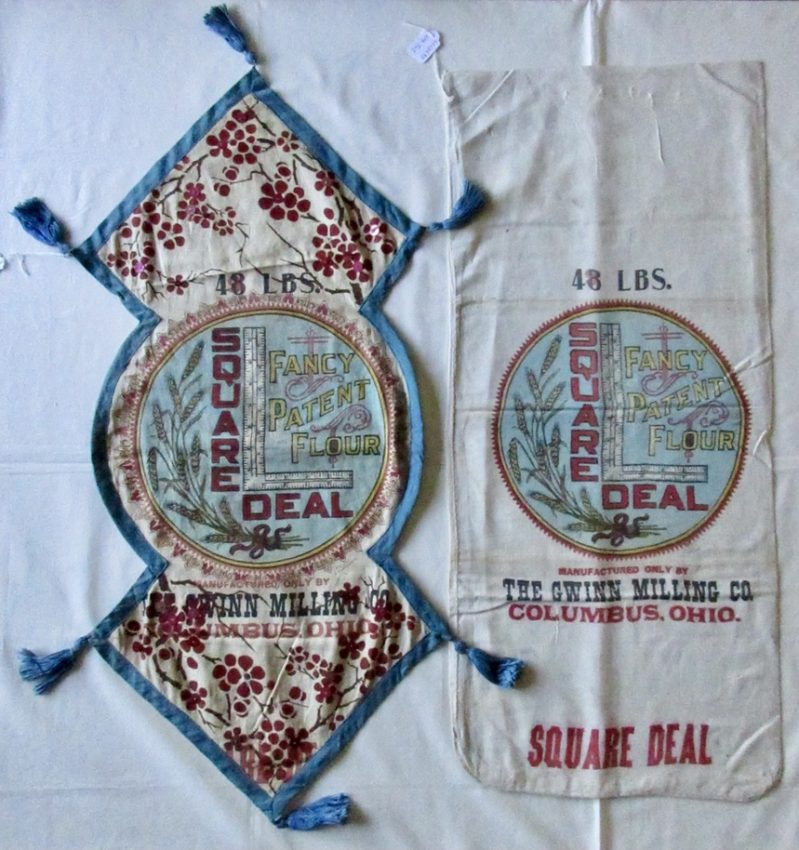 10 Square Deal, hanging folder for newspapers; painted and trimmed with blue border and six tassels, sewn on sewing machine.
Signed with the name: Thérèse Foidart (ºLiège 1898.04.12; she lived at Boulevard des Anglais, Spa, in 1930; daughter of Anne Marie and Laurent Foidart-De Radoux; her father was a musician). 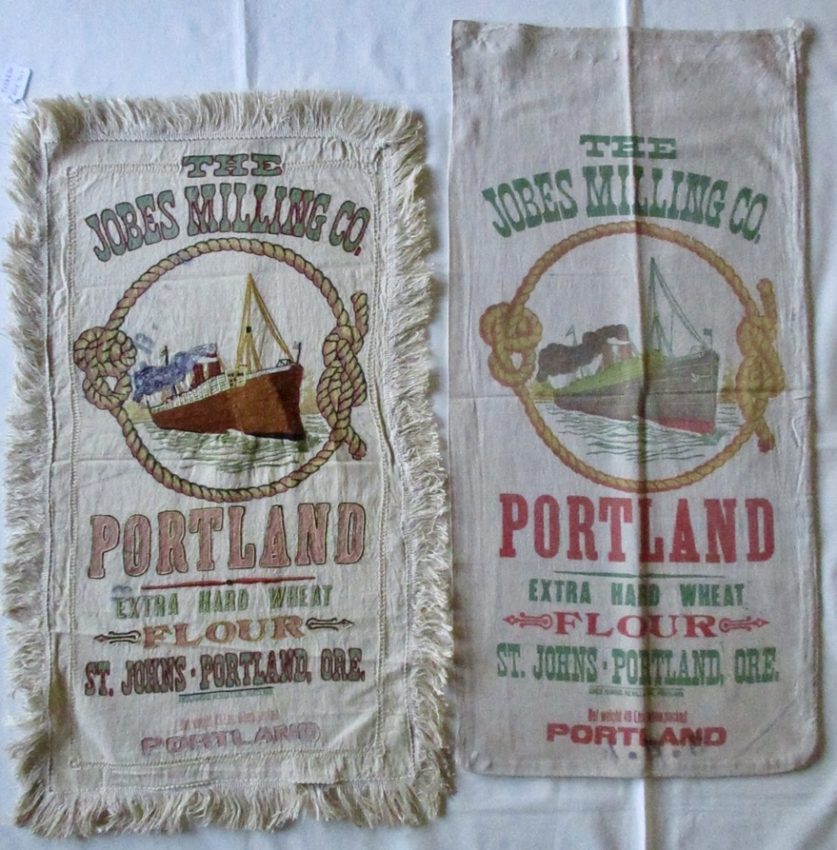 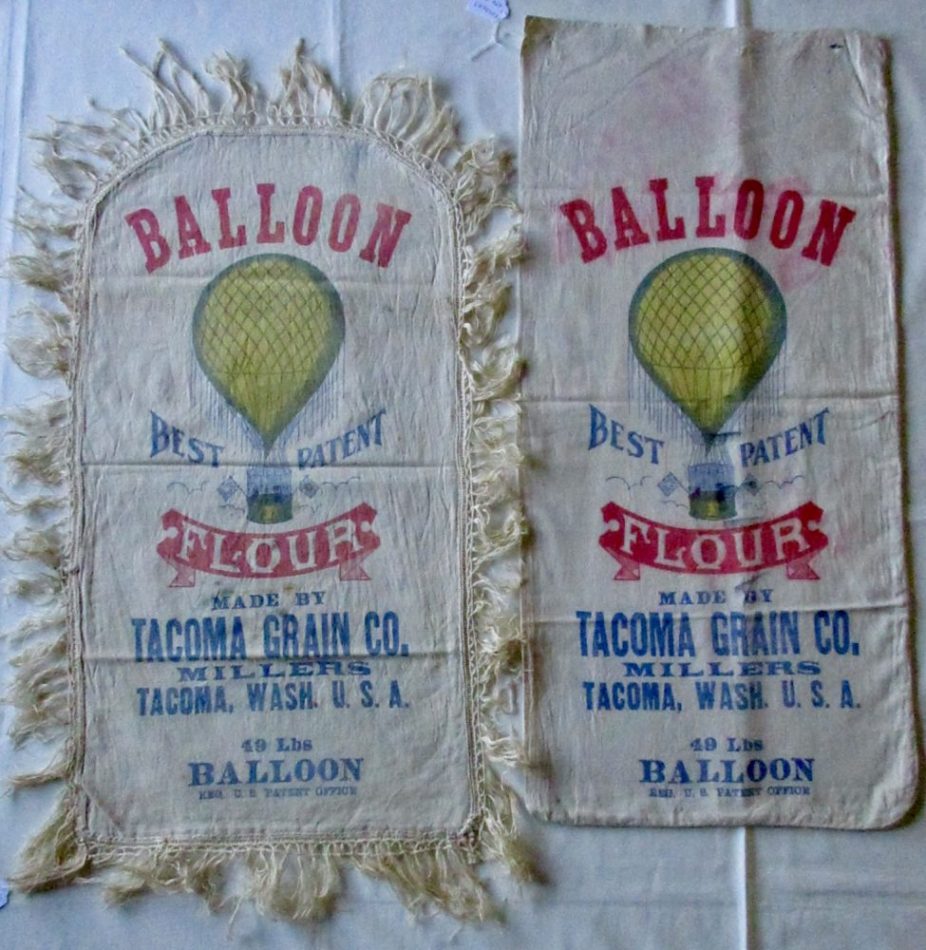 The decorated flour sack Keystone is a sous-main, a folder or desk pad, which holds two posters from the late December sales exhibition of Sacs Américains in Liège at the “Continental, Salle Mauresque”. Would the Welsh family have made the purchase there?
Or did (one of the members of) the Welsch family help prepare an exhibition at the Ecole Moyenne?

Perhaps the collection had already been created earlier. A newspaper reported the sale of decorated flour sacks through store windows.

The class contribution from the Ecole Moyenne may have been destined to go directly to the U.S.A. via the American delegates for the province of Liège from the Commission for Relief in Belgium. The CRB delegates visited the school in February 1915. David Nelson’s photo album dated February 22, 1915 bears witness to this.

When studied closely, the collection of two times twelve flour sacks resembles what today would be called a “teaching kit”. Thanks to the Welsch donation, we have a practical “pattern and inspiration book” of decorated flour sacks.

Thanks to:
– Musée de la Vie wallonne’ staff for their welcome and the preparations for my visit. In particular, I would like to thank Nadine de Rassenfosse, Aurélie Lemaire and Anne Stiernet.
– Hubert Bovens from Wilsele for his search for biographical data on the Welsch family and the three students of the Ecole Moyenne, in particular his work on and exploration of the impressive life story of Nelly Sasserath and her family.
– Georgina Kuipers for her attentive corrections to the English translations of my blogs.