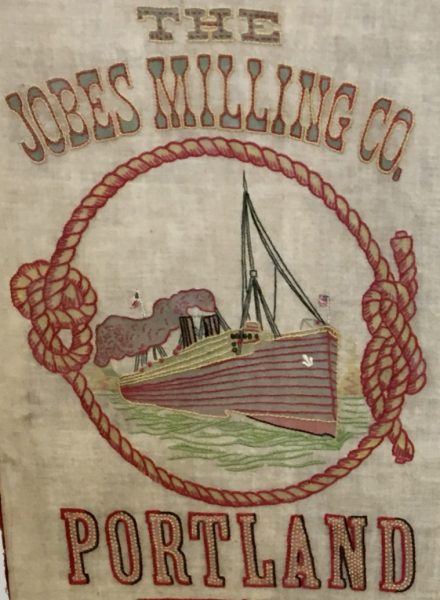 In Mons in the Belgian province of Hainaut, the Mons Memorial Museum (MMM) has a collection of nine decorated WWI flour sacks. The curator, Corentin Rousman, sent me the photo of a special diptych of decorated flour sacks in the museum’s depot.

The diptych was due for restoration and according to information from the museum (autumn 2019) it would be restored in the restoration studio of TAMAT in Tournai.

The left panel of the Mons’ diptych: “Portland, The Jobes Milling Co.”

The flour sack from St. Johns, a place located next to the port city of Portland, Oregon, bears a powerful image of a steamship surrounded by knotted ship rope. The printing is carefully embroidered. The patriotic element in the embroidery is the color combination red, yellow, black.

Portland was known as an important port in the western US, from where grain was shipped to destinations around the world. The Panama Canal, which opened in August 1914, shortened the distance to Europe by 8,000 nautical miles. The history of the significance of grain for this port city is described in the report ‘Grain, Flour and Ships. The Wheat Trade in Portland, Oregon’ by George Kramer,  April 2019.

The Jobes Milling Co. was founded in 1904 by William Van Zant Jobes, he died in 1907, after which two sons continued the company. Allan R. Jobes was the owner in the period 1914-1918, he must have been the one to have contributed to food aid for Belgium. The mill’s building was demolished in 1930.

Shoshone County, located in Wallace, was the governing body of the mining district “Coeur d” Alene” in the state of Idaho. The area had a modest start as a goldmining district in the early 1880s. However, it was not long before the enormous potential of silver mines was discovered; the district quickly developed into “Silver Valley”.

In 1914, a collection effort for Belgian Relief took place, after which flour in sacks with this printing was sent to Belgium.

The crowned Belgian lion in cross stitches
The flour sack “Coeur d’Alene” has its lettered print emphasized by decorative embroidery. The embroiderer has added two designs of her own: the year 1917 decorated with ribbon and the patriotic addition of the Belgian lion.

The Belgian lion wears a golden yellow crown, the embroidery is executed in cross stitches. This is remarkable and refers to a young embroiderer who made the embroidery at school.

Similar crowned Belgian lions in cross stitches are found on embroidered flour sacks in other collections with reference to embroiderers and schools. Marcus Eckhardt, curator of the Herbert Hoover Presidential Library-Museum, drew my attention to this phenomenon.

Three fine examples of embroidered flour sacks in their collection are:

“American Commission” with the embroidery “Thanks Anderlecht Brussel“;

“American Commission” with the embroidery “Hommage et remerciements d’Anderlecht” with a coat of arms bearing the years 14-15, flanked by two Belgian lions [1];

Apparently one of the exercises in the book was a cross stitched pattern of the Belgian lion. Thanks to Frieda Sorber, former curator of MoMu-Fashion Museum Antwerp, who sent me the photo. She saw this educational embroidery on cardboard in an album, created during the teacher training for pre-school education in Liège, 1920.

“Cours normal Fröbel” was a title that required further investigation. Until now, I only knew the Dutch expression “fröbelen” or “froebelen” as a verb in the sense of “non-committal work, taking part in silliness“. I have considered my interest and working on “sacks”, especially in the early days, as a passion in “froebelen“, in this somewhat derogatory meaning.

But here’s what the Liège embroidery in the cardboard book has taught me: Friedrich Froebel (1782-1853) was a German pedagogue of Romanticism, famous as a nursery teacher, theoretician behind “playful learning” [2]. Parents and educators were extremely enthusiastic about the braiding, folding, modeling, cutting, singing and weaving. In 1925, for example, the city of Amsterdam already had fifteen Froebel schools!

Playful learning. “Fröbelen” with a Mons diptych. Again, this blog was created in the spirit of Friedrich Froebel!

The Friedrich-Froebel-Museum is located in Bad Blankenburg, Germany.

“Sacks are full of memories. Every sack cherishes a precious and fragile story.”