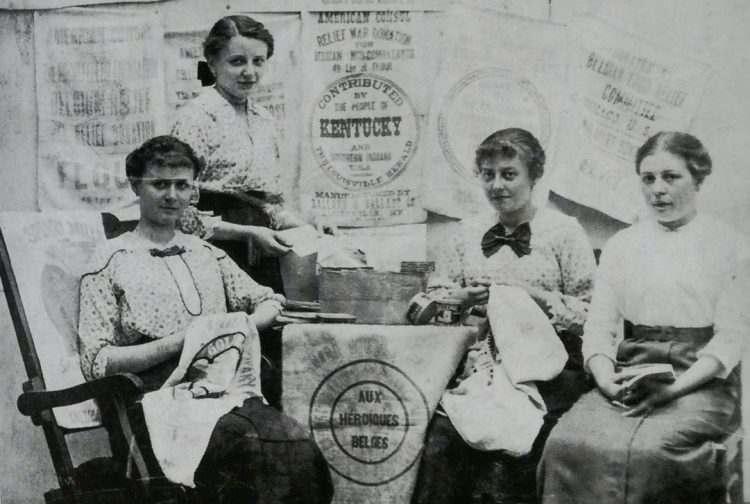 My search for one specific image: women who are actually embroidering flour sacks has been successful! This is the photo: two Belgian embroiderers holding embroidery needles and the flour sacks they were working on.

The ladies were posing for the photographer with a series of original printed, unprocessed flour sacks in the background, probably in 1915. The location was Mons, the capital of the province of Hainaut. The women were committed to the charity work for prisoners of war, the “Mallette du Prisonnier”.

May 4, 2020, Monday afternoon, the long-sought photo ended up in my mailbox, sent spontaneously by Rob Troubleyn. What a gift! Rob Troubleyn is a specialist in the history of the Belgian Army during WWI at the In Flanders Fields’ Knowledge Center in Ypres. Rob is one of the leaders of the “100 years of the First World War” project of VRT NWS, the news service of the Flemish Radio and Television broadcaster. During my research in the Knowledge Center, June 2019, we had met and exchanged contact details. It resulted in this great surprise.

The photo is printed in the book “La Wallonie dans la Grande Guerre 1914-1918” by Mélanie Bost & Alain Colignon (CEGESOMA), published in the series “Ville en Guerre” at Renaissance du Livre in 2016.
The photo itself is solidly archived in the Musée de la Vie Wallonne in Liège, so it was not hidden in a dusty archive or stored in a box in the attic!

Sports competitions were organized, such as football, cycling, athletics and bounce (“jeu de balle”), the proceeds of which were for this good cause. [1]

Selling unprocessed and decorated flour sacks would also have been part of the money collection as is shown in the photo.

The “Work of the Prisoners of War” was organized locally throughout Belgium. The aim was to raise money and donations in kind to help Belgian prisoners of war in Germany. It took care of shipments of clothing and food. The organization consisted of a group of dedicated (young) ladies and gentlemen who came together to compile and send packages. Thousands of packages of clothing and foodstuffs were shipped to Germany every year. All towns and villages took care of the prisoners from their own community. (See my blog “Een geborduurde Paaszak in Gent: hulp aan krijgsgevangenen“)

The caption of the photo doesn’t properly describe what is actually visible in the photo, namely four young women, two of whom have flour sack embroidery in hand, decorated with empty, unprocessed flour sacks. On the table is a box, “the suitcase”, which the standing woman is filling. The seated woman, on the right, is holding a book, probably the notebook in which orders were written. At the “Caisse de Vivres” the benefactors could buy or donate their packages weighing two kilograms for three francs and five kilos for six francs, it says on the “Mallette du Prisonnier” placard.

Four small flags, of which I recognize the Belgian and American, confirm the patriotic background of the activity.

The flour sack prints are very recognizable. Processed and unprocessed flour sacks with these prints can be found in public and private collections, both in Belgium and the US. [2]

On the left, the lady on the chair has a backrest, a “Sperry Mills American Indian” flour sack, very popular amongst collectors, as much in 1915 as now in 2020. A sack “Aux Héroiques Belges de la part de leurs Amis Vancouver Canada, Hard Wheat Flour British Columbia Patent 98 LBS” is hanging from the table. On the left wall are two flour sacks “CASCADIA Portland Roller Mills, Portland, Oregon” and “American Consul The Rockefeller Foundation Belgium Relief War Relief Donation FLOUR 49 LBS net“. In the center above the table we see the flour sack “Contributed by the People of Kentucky and Southern Indiana USA through The Louisville Herald“. To the right of that I distinguish the flour sack “Contributed by the People of Indiana USA“, collected by the Indianapolis Star newspaper for the Belgian Relief Fund. On the top right wall a flour sack “Hanford Roller Mills, HG Lacey Company, Hanford, California” has been hung. Underneath is a flour sack “Donated by Belgian Food Relief Committee, Chicago, U.S.A.” Finally, I see behind the standing young woman a “Chicago’s Flour Gift” sack, collected by the “Chicago Evening Post“.

The two flour sacks in the hands of the embroiderers are currently not identifiable to me.

“In Mons. The “prisoner exhibition”. – Since a few days we can admire a shiny decor of fine woodwork and scarlet fabrics in the Mali windows in the Rue de la Chaussée in Mons, in which artworks are presented, paintings, watercolors, photography, pyrography, tin, brass and relief leather, embroidered flour sacks, various kinds of lace, embroidery, etc. All this together is the ‘Exhibition of the Mons prisoner’; everyone contributed to the constitution. Men and women, children and old people, rich and poor, they all turned out to be artists!” [3]

Now that I take a closer look at this photo, I am delighted to see two flour sacks that are the same as the ones in the photo of the embroiderers: “Sperry Mills” and “Rockefeller Foundation“!

Coincidence or not, the decorated flour sacks in WWI continue to fascinate me!

My sincere thanks to Rob Troubleyn for sending the pictures!