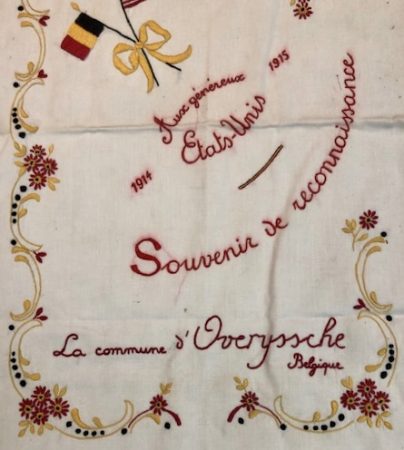 For my flour sack trip to the Flemish Brabant town of Overijse I took the digital highway. The journey went via the American city of Urbana in Ohio. Later I made a detour through West-Branch, Iowa. Please note: The old spelling of Overijse is “Overijssche”.

Urbana, Ohio
The Champaign County Historical Society Museum (CCHSM) in Urbana preserves a collection of objects obtained through the couple Brand Whitlock (Urbana, Ohio 04.03.1869 – Cannes, France 24.05.1934) and Ella Brainerd-Whitlock (Springfield, Ill. 25.09.1876 – Brewster, NY 11.07.1942). The diplomat Brand Whitlock was an American minister plenipotentiary in Belgium with headquarters in Brussels during WWI; he was patron of the Commission for Relief in Belgium (CRB) and the Belgian National Relief Committee (CNSA).
In gratitude for their work in Belgium the couple received many gifts, including decorated flour sacks.

Whitlock collection
All textile objects in CCHSM’s Whitlock collection have been described online, but photos are usually missing. Several descriptions made me suspect that the objects could be decorated flour sacks, two of which are specifically from the municipality of Overijse. When asked, Cheryl Ogden, director of the museum, was eager to help. Megan, the museum’s intern, sent me the photos.[1]

“Nr. 3999:
32″ x 18” pillow top banner
The banner has the red, yellow, black banner of the Belgian flag. On the lower right hand there is tied an American Flag. The top is composed of a center design where one knight speaks to another on horseback. The knight has on a blue cape. Under them is a blue and yellow shield with a lion on it. There is a wheat design on the cloth. It says in red on it “A Son Excellence/ Brand Whitlock/ 1914/ Souvenir de Reconnaissance/ 1915 La commune d’ Overyssyche.” There are also stamps from its original use on it.”

“Nr. 4002:
18″ x 30” embroidered pillowcase.
There is a card sewn into the front. It has a red, black, and yellow ribbon threaded through it.
The Pillowcase is embroidered with a yellow basket that has red, yellow, balck flowers. The flowers curve down and around the side of the case. Inside the curve are American and Belgian flags. They are tied together by a yellow ribbon. The words Ausc generusc/ etats-unis/ souvenir de reconnaissance/ 1914 (-) 1915/ La commune d’ Fueryssche (?)/ Belgique (?).

The case manufacturer’s stamp is on the bottom.”

The flour sacks do not show any original prints referring to mills or American or Canadian relief organizations. The presentation, dimensions and double fabric of the objects seem to confirm that these are embroidered flour sacks. “La Commune d’Overijssche” was, according to the text, the initiator of both embroidered sacks; it dedicated one flour sack to Mr. Brand Whitlock, the other to the generous United States.

Garlands of golden grain stalks, white daisies, blue cornflowers and green ivy leaves form a wreath around the coat of arms of Overijse.

The official coat of arms of Overijse dates from 1818: “In glaze a Saint Martin on horseback, sharing his cloak with a poor man, standing on a ground, all made of gold; in the tip a shield of glaze with a crossbar, accompanied in the shield head by three lilies and in the shield foot of a lion, all of gold.” In the embroidery, the cloak of Saint Martin is blue, the rest gold.

Saint Martin on horseback appears again in the official stamp, in black ink, of the municipality of “Overijssche” on the flour sack. The edges are finished with ribbon in the colors red, yellow, black; the top edge is finished with needlework.

Overijse, Flemish Brabant
I wondered: are the two flour sacks in the Whitlock collection known amongst those in Overijse, Belgium? To find the answer I turned to the local Historical Society De Beierij van IJse. They were not aware of the existence of these flour sacks. Piet Van San, vice-president of De Beierij van IJse however, provided me with an interesting article and beautiful photos.
In 2014, the magazine Zoniën paid attention to the needs of occupied Belgium. Djamila Timmermans wrote the article: “Honger, voedsel en hulp in Overijse, WO I” (Hunger, food and relief in Overijse, WWI). [2]  In 1915, the photographer Louis Rigaux (1887-1954) took a series of photos of the local Relief Committee and the activities. The photos have been kept in the archives of Jean and Isabelle Rigaux, they are included as illustrations in the Zoniën article.

The photo on the cover of Zoniën 2014-2 shows the local relief committee with two decorated flour sacks. The embroidery of garlands of corn stalks, daisies, cornflowers and ivy leaf is the same as the embroidery on the CCHSM flour sack No. 3999.

By whom and where the flour sacks in Overijse were embroidered is as of yet unknown. Perhaps the embroiderer’s name “Mlle. Marie Brankaer from Malaise-sous-Overijssche” could lead to further information.

Piet Van San drew my attention to two more decorated flour sacks: “We have two more elaborately crafted flour sacks (1915) in Overijse – of exceptional quality. One is kept in my wife’s family, another copy in the archives of the Historical Society De Beierij of which I am the vice-president.” As soon as I have scans of photos of these flour sacks, I will post them to this blog.

Through my research into decorated WWI flour sacks, I made an adventurous sack trip from Urbana to Overijse on the digital highway and met inspiring people.

Addition November 8, 2020
During another flour sack trip I took a short detour through West Branch, Iowa. The Herbert Hoover Presidential Library-Museum (HHPLM) appears to have a “Overijssche-Maleizen” (“Malaise-sous-Overijssche”) flour sack in its collection. A decorated flour sack from the village where embroiderer Marie Brankaer lived!

“Der Belgian Dank”, “Liefderijk Amerika” (Thanks from Belgium, Loving America) is painted on the sack. The embroidered garland of flowers and stalks of grain are comparable to the ones on the other Overijse sacks. Here too the top edge is finished with open stitching.

My sincere thanks go to:
– Cheryl Ogden and Megan of the Champaign County Historical Society Museum;

– Hubert Bovens and Filip Brankaer for the search for biographical data of embroiderer Marie Brankaer.

Hubert Bovens visited the cemetery in Maleizen (Overijse) to investigate her date of death. He found her grave as well as the name of Edouard Vankeerbergen, the man she married.

[1] Champaign County Historical Society owns several WWI flour sacks in its Brand Whitlock collection. How many is currently under investigation, though there appear to be at least seven pieces. Megan took and sent overview photos and detailed photos of these seven flour sacks.
More on their collection in this blog: From Aid to Embroidery in Ohio, U.S.A.

[2] Timmermans, Djamila, Honger, voedsel en hulp in Overijse, WO I. Overijse: Zoniën, quarterly magazine Historical Society De Beierij van IJse vzw, 2014-2, p. 47-75.
Djamila Timmermans wrote the article “Milddadigheid” van de stad Portland (Generosity of the city of Portland), Oregon, in the same issue, focusing on the unveiling of a memorial stone in Overijse in 1930: “the memorial stone, placed at the Municipal School of ‘t Center, in gratitude to the generosity of the city of Portland (Oregon) America, during the war 1914-1918”.