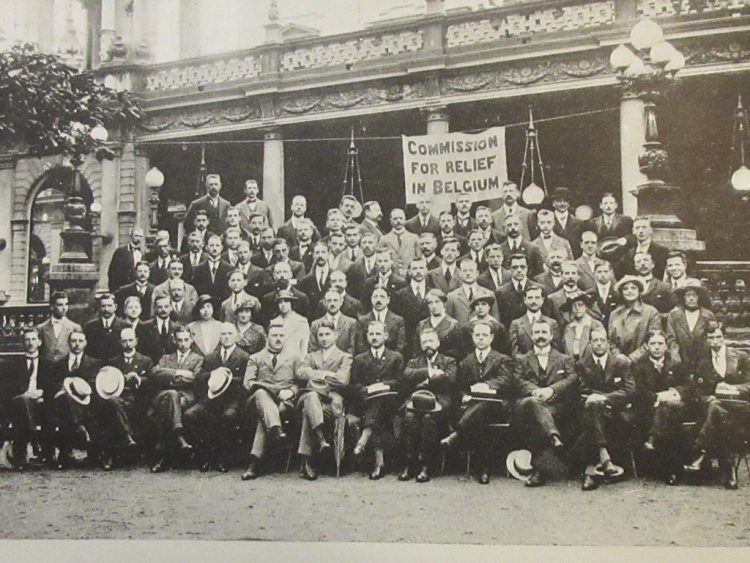 The outbreak of the war and the German occupation of Belgium made a big impression on the Dutch. The tension caused by the war in the surrounding countries cast its shadow over the country; maintaining neutrality required an enormous effort. The years of mobilization and army readiness were a battle of attrition for the Dutch soldiers.

Thousands of Belgian refugees came across the border and asked for help from the Dutch population. A message in the

Nieuwe Rotterdamsche Courant tells about the provision of humanitarian aid by a Rotterdam women’s committee, with support from the American Rockefeller Foundation, a philanthropic institution with a clear vision: they are willing to help on condition that benefactors are willing to work. And so, 80 Belgian women have started sewing and knitting shirts and underpants:

“In response to the great demand for underwear, some of the ladies in this field have initiated a small-scale trial to get Belgian women to sew for their unfortunate fellow countrymen. That this initial test promises to be a great success is due to the unexpected and incredibly appreciated help of three American gentlemen sent by the “Rockefeller Foundation for War Relief.” Mr. Jenkinson, Dr. Rose and Mr. Bicknell have been commissioned to travel throughout Europe to see where help is most needed. Having arrived in our country, they also found great need here, especially among the Belgian refugees due to the forced inactivity. They are willing to help them if there is a desire to work, and they want to start a test in Rotterdam which, if it succeeds, will be continued throughout the country. If this test fails, they will withdraw their promise.
A committee has been formed, consisting of the aforementioned ladies and Mr. Jenkinson; In a few days, this committee set over 80 Belgian women in the Uranium hotel to sew and knit. With great willingness and gratitude, these women now work for their countrymen; 75 pieces of men’s clothes are delivered per day. 1/3 of this goes to refugees in Rotterdam; 2/3 mainly to the interned Belgian soldiers. All costs of sewing machines, fabric, etc. are borne by the Americans, who thereby indirectly do a great service to the country, and are entitled to great gratitude. The committee sincerely hopes that our city will not lose the high opinion that America has of Rotterdam and that it will show with dignity the confidence it has placed in it.” (NRC January 7, 1915)

The city of Rotterdam played a unique role in the success of international aid to the Belgian population through the hospitality provided to the Commission for Relief in Belgium (CRB).
The port of Rotterdam was the place where the CRB brought all relief supplies with ocean steamers and then transshipped them on inland vessels for transport to Belgium.

The CRB headquarters were located in London and the CRB set up an office in Rotterdam to coordinate transport.

In “A History of the C.R.B.” Tracy B. Kittredge [2] described the history of the CRB in Rotterdam. The CRB representative, the American Captain Lucey and some employees, first moved into the office of Furness & Co. On November 21, 1914, the office moved to its own location at Haringvliet 98.

Mr. J.M. Haak was manager of the office, Mr. Van der Sluis was head of the shipping department and was responsible for the organization of the inland vessels that sailed to Belgium and the handling of the goods in the port of Rotterdam, the Maashaven, to be precise. A transshipment that was usually carried out at record speed. Mr Van den Branden was the Belgian representative of the NKHV / CNSA and was mainly concerned with financial operations. In December 1914 the American C.A. Young followed Captain Lucey as director of CRB Rotterdam. The office was well organized and efficient and worked at low costs; over the years it grew into an organization of dozens of employees. Mistakes were not made, it formed a strong contrast to the CRB office in Brussels, which sometimes managed to blunder in the execution of business, according to Tracy Kittredge in his historiography.

November 1914:
24 Today, the J. Blockx steamship has arrived from London, carrying a load of food for the Belgians

January 1915:
2. The London steamship Lincluden arrives here with food for the Belgians.
8. The Calcutta steamship has arrived here from Halifax with wheat and other food for the Belgians
11. Arriving here with wheat for the Belgians are the steamships: Kentigern from New York, Rio Lages from New Orleans and Ferrona from Philadelphia.
…
December 1915
31. Since January 1, the Nieuwen Waterweg, has welcomed 3760 ships, destined for Rotterdam, measuring 4,224,805 net register tons, i.e. compared to the clearance before the war. The number of incoming inland vessels was 161,604 with a volume of 24,836,418 tons.

Kittredge has provided figures of CRB relief supplies that have been brought to the port of Rotterdam during the first year 1914-1915:
– On November 15, 1914, the first ship with relief supplies arrived: the SS “Tremorvah” with 5,000 tons of foodstuffs, a gift from the Canadian province of Nova Scotia.
– From mid-November 1914 to mid-November 1915, 186 full shiploads and 308 partial shiploads arrived.
– In the first operational year, CRB Rotterdam received a total of 988,852 tons of goods. If I compare these CRB figures with the figures from in the Rotterdam Yearbook, I conclude that the port of Rotterdam owed several tens of percent of its activity to the transit of goods to Belgium.

The unique role of the city of Rotterdam is personally meaningful to me with regard to my WWI flour sacks research.
I have lived in Rotterdam for 10 years, not far from the port. From the Erasmus University where I studied, we had a view of the Maas and saw ships passing by.
There appears to be little knowledge about the history of the CRB and the decorated flour sacks in WWI. It feels useful to be able to record a forgotten history of the city and the port.

My research shows that the port of Rotterdam is the only location in the world where all flour sacks from WWI have to have been!

Rotterdam was the transport center:
– The sacks of flour were supplied from various North American locations: ports, both on the east and west coast;
– The transit of flour sacks with inland vessels went to different Belgian ports, such as Antwerp, Ghent, Brussels, Liège.

So: every flour sack in WWI traveled through Rotterdam between 1914-1919!

However, the unique place that Rotterdam has occupied as a port in providing assistance to occupied Belgium did unfortunately not result in a collection of any decorated flour sacks in Rotterdam.

Fortunately I was inspired to write this blog about Rotterdam thanks to the start-up of “Glass Blowing Studio Keilestraat” in the Nieuw Mathenesse harbor area between Keilehaven and Lekhaven.

For years I had hoped to be able to blow glass in Rotterdam.
Last week was the day: A big “Thank you” to Selma Hamstra, she offered me together with my colleague Yvon Trossèl a pleasant and warm hospitality in her studio. It was a great opportunity to breathe new life into a sack full of memories!

**) Joseph Jean de Pooter is Paul Bekkers’ maternal grandfather, who responded to this blog. De Pooter lived at Nieuwe Binnenweg 274b. In his collection is a list of CRB employees signatures, dated 9/16/1918