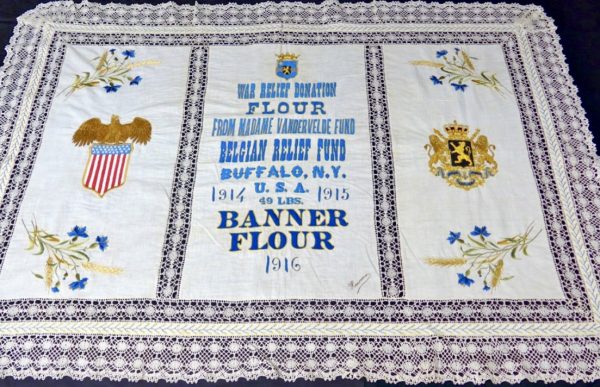 The decorated flour sacks are surprisingly featured in Lalla Vandervelde’s biography “Monarchs and Millionaires”.[1]
She reflects on her relationship with American men during her stay, which leads to the sacks of flour she sent to Belgium and her name on these sacks. She was in fear about added print, because the Germans did not accept that there would be names of senders on the relief goods. It turned out fine and later Lalla saw decorated flour sacks: they had been sent to her by schoolgirls, who had embroidered the stamped letters of her name “Madame Vandervelde” on the sacks.

In a few paragraphs, Lalla summarized it in her book: “Men did not try to make love to me. I suppose they realized that being in mourning, very much upset about what was going on in Europe, and very hard worked with speaking all over the country, any advances would have been discountenanced immediately. But some of them were distinctly sentimental. One, who was also very energetic and helpful, wrote me almost passionate letters about my work. He compared me to Joan of Arc and Diana of Ephesus: a curious mixture. Knowing that my chief interest in peace time had lain in questions pertaining to art, he used to send me long disquisitions on Berenson’s latest book, at the same time quoting prices, in the most business-like way, of commodities that I might buy and send to Europe.’

About the choice of cotton flour sacks: ‘It was this kind and generous friend who helped me to send off the first lot of sacks filled with flour to Belgium, the country that needed bread most at the time. It was his idea to choose linen of which the sacks were made in such fine quality that when washed and bleached it could be used for men’s shirts or for little frocks or overalls for children.’

About stamping the name Madame Vandervelde on the flour sacks: ‘My name was stamped on each one of the sacks, and I remember my anguish when, shortly after they had been shipped, the news came that the Germans would not allow any object marked with a name to enter a country they were occupying. I spent a sleepless night wondering what would happen to the flour that was wanted so badly. Much to my relief, the German Embassy in Washington, to whom my kind friend had wired, answered that permission would be given for the sacks to be landed.

About the embroidered flour sacks that she sees later: “Later I had the great joy to see some of them again. They were sent to me by school children who had embroidered the letters of my name on them surrounded by pretty designs of their own making.’

Contrary to the impression that arises from these paragraphs about the contributions to food aid, Madame Vandervelde herself preferred to use the money she collected mainly for the real heroes: the Belgian soldiers, who fought in the trenches on the small piece of Belgian land that was still in their occupation. However, this was impossible. America’s neutrality only allowed the collection of money for aid to the civilian population of the war countries. Nevertheless, in private conversations, she managed to acquire some donations for the help of soldiers. She bought and shipped the following goods to them: 10,284 pairs of socks, 2,160 sets of underwear and 400 blankets.

Despite her mission’s success, Lalla experienced her six-month stay in the US as a major burden on her nerves. She didn’t know what it was like to be unhappy for so long, she couldn’t forget the horrible war for a moment, she was tired and depressed. ‘The mere fact of being so very far away from my own people, from my compatriots and friends, on another continent, in another world, where, however kindly received, the whole point of view, the whole outlook on life, was different, seemed more than I could bear sometimes. Almost every time I opened a European paper I saw news of the death of a friend, and I used to leave my letters from Europe unopened for days, so terrified was I of finding bad news.
…
Bad news from home, continual speaking in public, equally important private engagements, when I tried to enlist the sympathies of influential individuals for the cause of the Allies, long railway journeys by night, at the end of which there were always crowds of reporters anxious to interview me before I even had a bath or breakfast; such conditions were not destined to improve an already uncertain nervous system.”

At Yale College in New Haven, she was the first woman to speak to the students: “they attended my meeting en masse”. She also visited Harvard. Then she went to Canada where she spoke in Ottawa in the presence of the Duke and Duchess of Connaught and Princess Patricia. At her farewell, the Duke pressed a $ 600 check in her hands.

Back in New York in December 1914, she tried to express her sense of art, attended several concerts, and went to museums and galleries to view paintings. During her visits to millionaires, she was usually given the opportunity to see these people’s private art collections.

American praise
In mid-March 1915, Lalla Vandervelde was in Carnegie Hall, New York, where she delivered the last speech of her mission. Mr. Choate, one of the foremost lawyers in the US, praised her. The speech is fully printed in her book.

“TO MADAME LALLA VANDERVELDE:
On the eve of your departure for your home in Belgium it seems fitting that there should be some expression, inadequate though it must be, of the great regard in which you are held by hosts of men and women in this country.
During the five months since you came to us, shortly after the outbreak of the War, you have presented all over the United States the dire need of your unhappy countrymen. More than any other person you have made us realize the urgency of this need, its appaling extent and its heartrending appeal. You have been inspired by an eloquence born of your noble mission and you have won the response which could not fail to come.
There are forms of patriotic service which demand courage of a higher order even than that of the soldier in battle, a courage which has not the spur of excitement or impulse, a courage in the face of suspense, of heart-sickness far from home, family and friends, of utter weariness of body and spirit. Such courage, dear lady, since first you came to these shores to this present moment, has been yours.
We honor you as a brave souled woman; we thank you for making so clear our privilege of such human helpfulness as we can give, and we bid you farewell with feelings of deepest sympathy and the most earnest hope that brighter days will soon return to the country you love so truly and serve so devotedly.
New York, March 17, 1915”

Home on the Lusitania
On April 3, 1915 she left for Europe on the ship “Lusitania” of the British Cunard Line. In Lalla’s words, the ship made “the last journey to Europe before the ever memorable one”, the second to last trip before it would be torpedoed by a German submarine and perished. This voyage of the passenger ship was also full of tension for the passengers, there was danger during the crossing.

The New York Evening World headlined, “Lusitania sails to-day with 838 pale passengers – Fear of German Submarines Makes All on Board Nervous – Some Cancel Passage. – Fast Trip is Planned- Liner’s Speed Expected to Protect Greatest Number to Sail Since War Began.” The security measures were strict, all passengers were carefully examined and their luggage checked.

At the last minute, a messenger brought a package with $ 500 for Madame Vandervelde on board. Three war correspondents, including Mr. E. Alexander Powell of the “New York World”, were also on board.[2]

All this has not been mentioned in Lalla’s biography. She did talk about a luxury problem. Her cabin on the ship was loaded with gifts from American friends and supporters, and she shared them as much as she could with staff and fellow passengers. She kept the fruits for her family in England.

In New York Lalla had prepared for the possible suspicion about her work from people back in Europe. She had the finances and administration of the Madame Vandervelde Fund, punctually maintained by her secretary Miss Conklin, verified by a leading accounting firm. After returning to England, she was visited by a journalist who asked her which cities she had visited on her mission. The American place names were so unknown to him that she had to spell them for him. Then he asked how much money she had collected. Her answer “about $ 300,000, equivalent to 60,000 British pounds or one and a half million francs” led to his response “That is quite impossible for a woman”. Whereupon the auditor’s report emerged and she urged him to publish the detailed justification of the funds in his article.

Belgian newspapers reported in April on the results of Mrs. Emile Vandervelde’s mission[3]:
“With the thought of coming to the aid of the Belgian refugees, Madame Vandervelde, wife of the Minister of State, went to America to give a series of lectures about Belgium and about the German invasion of our country. These lectures yielded one and a half million francs.”

Five months later, another article appeared in De Legerbode[4] (The “Army Messenger”), showing the destination of the funds raised in America:
“The courageous traveler traveled through the United States from September 18, 1914 to April 2, 1915. She managed to collect the good sum of 1,437,135.75 fr., which was spent as follows:
For return to the homeland 388,479.45 fr.
For food purchases for Belgium: 995,426.30 fr.
For the special fund: 53,230 fr.
Madame Vandervelde continued her apostolate in England, where her brilliant readings yielded the sum of 30,000 francs. Here is a vigorous woman, and a brave propagandist of noble thoughts, who deserves general gratitude.”

Further research
In the past three blogs I have tried to tell part of the life story of Lalla Vandervelde-Speyer. She was a striking, yes, legendary woman. Especially when I consider her role towards the decorated flour sacks from WWI.
Yet surprisingly little has been written about her. Where she has been mentioned, sometimes blatant inaccuracies have been debited. After her divorce from Emile Vandervelde, living in England again, she apparently disappeared from publicity. She died in Putney at the age of 95.
For twenty years Lalla Speyer and Emile Vandervelde were partners with a great mutual influence on each other’s work and life. They both played a role, together and separately, on the world stage in the turbulent time of 1900-1920.
I would heartily recommend further research into the life of Lalla Vandervelde-Speyer.

Addition October 1, 2022: Lalla Vandervelde is on Wikipedia
The knowledge about Lalla Vandervelde and her life story is spreading online. From September 23, 2022 she has her own (English) page on Wikipedia.
As befits her, there are inaccuracies in the text. Further work on her history and more publications are therefore required! I look forward to the sequel.

Sacks are full of memories. Each sack cherishes a precious and fragile story.

Sincere thanks to Evelyn McMillan, Stanford University. She sent me pictures of decorated flour sacks in the collections of the Herbert Hoover Presidential Library Museum and the Hoover Institution Archives.