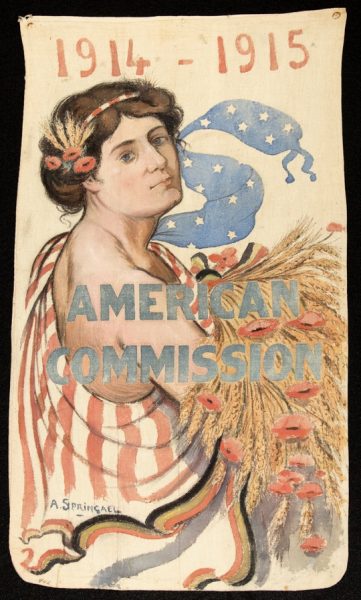 A glimpse into my day of research on Thursday, March 13, 2019.
I am looking for connections in Brussels of Lewis Richards, member of the Commission for Relief in Belgium (CRB).

In 1908, Lewis (Lewis Loomis Richards, born in Saint Johns, Clinton County, Michigan, on April 11, 1881, died in Michigan in 1940) and Berthe (Berthée Emilie Smedt, born in Brussels on June 19, 1884) were married in Brussels.
It so happens that my grandparents Van Kempen were also married in 1908. A funny coincidence that makes history come alive for me.
The wedding photo of Berthe shows a “cloud” of a wedding dress. Imagine it would have been preserved, the photo displays such!

Berthe’s mother, Emilie Marie Jeanne Schamps, was born in Brussels on September 25, 1856. Charles Smedt (born in Brussels, December 24, 1852, died January 30, 1911, butcher by profession, then restaurant owner) ran a restaurant during the World Fair in Brussels from his Grand Restaurant de la Monnaie, a “succursale” called: “Chien Vert” (Green Dog).
The phenomenon of the 1910 World Exhibition amazes me because of its scale; it is worth a deeper dive. The exhibition area was 88 hectares in size, 26 countries had a pavillion there and it attracted 13 million visitors. No wonder that Restaurant du Chien Vert is located in a monumental building; even it only lasted for six months.
I imagine that Lewis Richards would have performed in atmospheric concerts in his father-in-law’s restaurant.

Photographs of the World Exhibition were printed on postcards and were collector’s items. Through the website “La Belgique des Quatre Vents” I get a good impression of the “Exposition Universelle de 1910 à Bruxelles et Tervueren“.

My gaze is held by this poster. I recognize the lady in the middle … She is depicted on a flour sack!
I dive into my photo archive and find the painted flour sack by Antoine Springael in the “Moulckers Collection“.

What a find. Antoine Springael has drawn the poster for the “Cortège des Saisons” in July 1910 and later, in 1915, he depicted the same Goddess of Summer on the American Commission’s flour sack!
Quite funny to compare the warm colors of the inviting poster with the somewhat messy black-and-white photo on the postcard of the actual Cortège des Saisons.

Back to Berthe Smedt and Lewis Richards.
In his work for the CRB (officially from January 1915) in Brussels, Lewis played a role in the sale of decorated flour sacks to Americans who came to Belgium accompanying the delivery of relief supplies.

Mr. Edgar from “The Miller’s Belgian Relief Movement” placed an order in March 1915, 105 years ago this month, for embroidered flour sacks. I wrote about it in my blog “A Celebrity Flemish Flour Bag in the Land of Nevele”.

In 1917 Richards worked for the CRB in London and sold two Belgian lace cushions to the British Queen.

In short, Lewis Richards was a man of standing, lived in Brussels in 1914-1915, ran with the wealthy circles in Brussels from the inside, spoke the language of both Belgians and Americans. He would have known what it was like, the history of the decorated flour sacks …

I find information about Richards’ work for the CRB in various sources:

1) Hugh Gibson, secretary of the United States Embassy in Brussels, writes in “A Journal from our Legation in Belgium“, 1917 (pp. 342-344):
“Christmas 1914.- Immediately after lunch we climbed into the big car and went out to Lewis Richards’ Christmas tree. He has a big house at the edge of town, with grounds which were fairy-like in the heavy white frost. He had undertaken to look after 600 children, and he did it to the Queen’s taste. They were brought in by mothers in bunches of one hundred, and marched around the house, collecting things as they went. In one room each youngster was given a complete outfit of warm clothes. In another, some sort of toy which he was allowed to choose. In another, a big bag of cakes and candies, and, finally, they were herded into the big dining-room, where they were filled with all sorts of Xmas food. There was a big tree in the hall, so that the children in their triumphal progress, merely walked around the tree. Stevens had painted all the figures and the background of an exquisite creche, with an electric light behind it, to make the stars shine. The children were speechless with happiness, and many of the mothers were crying as they came by.
Since the question of food for children became acute here, Richards has been supplying rations to the babies in this neighbourhood. The number has been steadily increasing, and for some time he has been feeding over two hundred youngsters a day. He has been very quiet about it, and hardly anyone has known what he was doing.
It is cheering to see a man who does so much to comfort others; not so much because he weighs the responsability of his position and fortune, but because he has great-hearted sympathy and instinctively reaches out to help those in distress. Otherwise the day was pretty black, but it did warm the cockles of my heart to find this simple American putting some real meaning into Christmas for these hundreds of wretched people. He also gave a deeper meaning for the rest of us.”

2) Tracy B. Kittredge has described Lewis Richards as one of the CRB’s most valuable employees. Quote of page 283 from “The History of The Commission for Relief in Belgium 1914-1917“:
“…in January 1916… was succeeded as general secretary by Mr. Lewis Richards, who had organised the Commission’s work in Greater Brussels. It was Mr. Richards who had devised and put into operation the card catalogue of the population of Brussels which had made possible the checking of the bread distribution and the combing out of some 150,000 extra rations of flour which had been distributed to bakers who had fraudulently padded their lists. Mr. Richards, after performing this service in Greater Brussels, had gone to Northern France in April 1915 as chief representative for the most important French district, that of the north, with headquarters at Valenciennes. After a few months there he went to Holland, where he helped in the Rotterdam office until Hoover asked him to return to Brussels to become general secretary. He remained at this post until July 1916, when he went out to Rotterdam again, this time to become assistant director of the Commission’s office there. Almost a year later he was called to London as assistant director of the central office of the Commission, in which capacity he is still serving. Mr. Richards, because of his experience and personal qualities, proved throughout his whole service to be one of the most valuable of the Commission’s representatives.”

3) In July 1919, a laudation about Richards’ CRB work appeared in The San Francisco Call and Post.

If a personal archive of his were to exist, it would have to be found in the archives of Michigan State University in East Lansing.

A long time ago, in 1981, I was on holidays in Michigan to visit some college friends I had made in the “American Law” course during my law studies at Erasmus University Rotterdam. If only I could have known then that I would later wish to be in East Lansing in my search for decorated flour sacks.
That is why I am starting a new research day today, closer to home, in search of the history of the Smedt family, daughter Berthe and son-in-law Lewis Richards in Brussels!