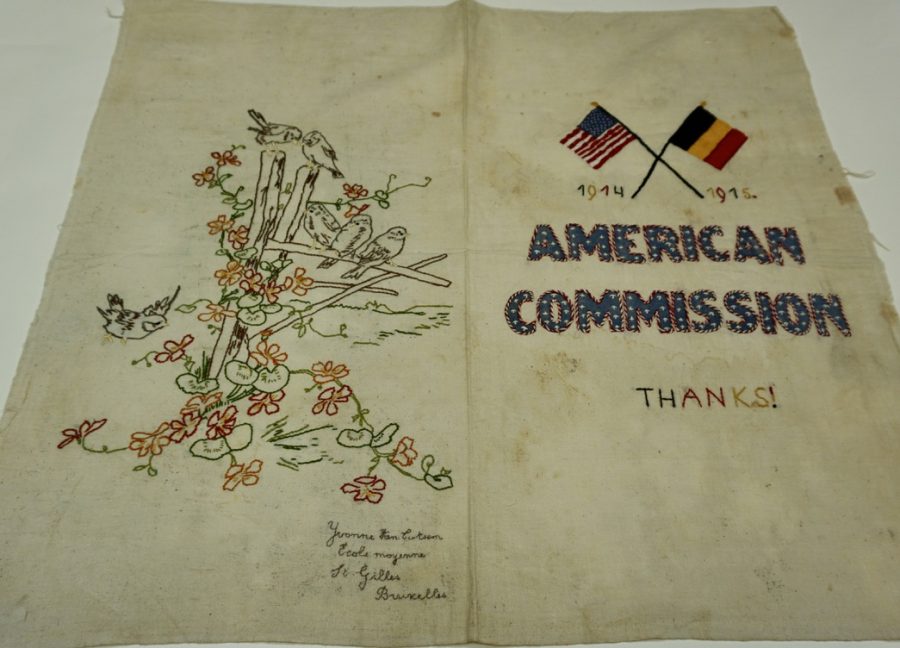 Marcus Eckhardt, curator of HHPLM, drew my attention to the class project of the school in Saint-Gilles. He wrote to me, “It appears that there are several class projects in our collections. We have several of the mostly identical projects, very obviously done by different students — some of the girls are more skilled needle workers.” It made me curious about these class projects, hence this blog was born.

The entire series of decorated flour sacks has been signed with the name of the school, and each student has recorded her own name. The origin of the flour sacks is the same: American Commission.

Biographical research
The girls were students, thirteen to fifteen years old, in 1915. This was revealed through Hubert Bovens’ valuable research into the girls’ biographical data.

Hubert motivated his special contribution to my study of the WWI decorated flour sacks as follows: “By looking up data on the people who embroidered the flour sacks (young, socially engaged women) or painted them (often well-known artists) we get to know the social entourage of these people. Often upper middle class.
I am trying to draw out their lives further, to determine their lifeline, a lifeline with a beginning and an end. Through my biographical research we have already encountered unexpected findings.”

The origins of the flour sacks AMERICAN COMMISSION
Decorated flour sacks bearing the name “American Commission” are frequent in the collections of museums and individuals worldwide.

The “American Commission for Relief in Belgium” or “American Commission” for short, was formed in London in October 1914 with American Herbert Hoover as its director. The commission’s goal was to help the suffering population in occupied Belgium with food and clothing.

“Large order: a quarter of a million dollars’ worth of flour”

Newspaper articles in early December 1914 reported on the purchase in Minneapolis, Minnesota, of large batches of flour by a principal intended for emergency aid to Belgium.

“Last week an order was received direct in Minneapolis for a quarter of a million dollars’ worth of flour, to be shipped as soon as possible for Belgian Relief purposes. Telegraphic instructions to purchase this amount were given to the editor of the Northwestern Miller (Mr. William Edgar (AvK)). Ability to manufacture the amount required within a definite and limited time, and to ship in solid trainloads, as well as the price, were conditions of the sale…..

All of the flour was to be packed in 49-lb export cotton sacks, to be made and shipped on receipt of instructions as to billing, which were sent by mail.
This order is paid for from funds in possession of the buyer, reserved for emergency flour purchases… ”(The Northwestern Miller, December 2, 1914)

Would the 49 lbs flour sacks of export quality have been imprinted with the “American Commission” stamp? Who decided to use this name on the ordered flour sacks? Pay attention to the recommendation that Madame Vandervelde made!

Addition July 16, 2022: Branding instruction AMERICAN COMMISSION
My research on May 26, 2022 at the Hoover Institution Library & Archives in Palo Alto, Ca., showed that Lindon W. Bates, as Vice-Chairman of the CRB in New York, ordered 50,000 barrels of flour fob Minneapolis on behalf of the CRB. The order was given by telegram on November 24, 1914. The instruction for the marking on the flour sacks was “two words, simply American Commission“.

How were the full sacks of flour transported?

The transportation went overland by train to New York and Philadelphia on the east coast of the United States. From both ports, steamships transported the loads of flour sacks to Rotterdam, The Netherlands.
At the port of Rotterdam, the cargoes of flour were transferred to barges and transported to Belgium into Brussels and other places.

Ecole Moyenne for Girls in Saint-Gilles
On October 4, 1880, the municipality of Saint-Gilles opened two “écoles moyennes” (middle schools) one for girls, one for boys. Both schools had two preparatory classes and one secondary class. The school building was newly built and opened in April 1882 by the Saint-Gilles’ mayor in the presence of the Minister of Public Works. In 1910 the girls’ school had 651 students, it provided good education by capable teachers, had a modern building and used the appropriate didactic materials.
The Saint-Gilles school teachers will have prepared their lessons in early 1915 to work with the girls on the empty “American Commission” flour sacks.

The sacks were twisted open, creating a piece of cotton cloth of approximately 60 cm height and 80 cm wide; the edges of the fabric were left unfinished.

On one side there are the blue letters: note that the letters are either on the left or on the right side of the cloth. Apparently, instructions were given by the teacher to work on the letters of the words AMERICAN COMMISSION as follows: the outlines embroidered with a red thread, then a white thread; within the letters, stars with a white thread.
Most of the pieces were indeed decorated this way, but a few deviate. For example, Jeanne Everaerts embroidered the outlines with a light green thread; Simone Sauvenée and Marthe Pander left the words as they were in original print.

For the other -blank- side of the flour sack, the students were given the freedom to decorate it as they wished.

I currently have photos of eight embroidered St.-Gilles flour sacks. Hubert Bovens provided the biographical data of the eight students.

Yvonne Van Cutsem (Saint-Gilles 1900.04.08 – Ixelles 1957.03.29; her father was a painter/decorator; she remained unmarried). Yvonne drew a pattern of branches, flowers, and leaves on the flour sack. Five little birds sit on the branches, one bird comes flying. She stitched the pattern with stem stitches in the colors green, red, yellow, and orange. The birds are embroidered as sparrows in grey and brown with golden beaks and legs (inv. HHPLM 62.4.44).

Henriette Delfosse (Anderlecht 1900.07.09 – she remained unmarried; she was still alive when her father died in 1964. Her grandparents on her mother’s side were bootmakers, her mother was a saleswoman). Henriette embroidered four abstracted flower baskets in red, yellow, and black threads (inv. HHPLM 62.4.70).

Adrienne Vervliet (Schaerbeek 1900.11.16; her father was a lithographer; she remained unmarried; she worked at the main board of the National Bank of Belgium in Brussels and retired in 1960). Adrienne embroidered a garland of flowers and leaves in white threads. With needlework she created a rectangle. Within the rectangle she embroidered: “1914 merci! 1915” (inv. HHPLM 62.4.40).

Léonie Rochette (Brussels 1901.03.03 – she (probably) married in Brussels on March 4, 1917 to the pastry chef Armand Chaussette). Léonie painted two flags, the Belgian and American, with crossed flagpoles and a green banner (inv. HHPLM 62.4.13).

Simone Sauvenée (Watermael-Boitsfort 1901.04.20 – Saint-Laurent-du-Var (F) 1995.02.02; her father was a sales representative). Simone embroidered in cross-stitch a rectangle with black lines. Inside the rectangle she embroidered “Merci” with yellow and red flowers and leaves (inv. HHPLM 62.4.206).

Suzanne Goetgebuer (Saint-Gilles 1901.05.21 – Forest 1970.02.04; her father was a designer/publisher-book dealer; she married Robert Van Cutsem, younger brother of Yvonne Van Cutsem). Suzanne painted two laurel branches with red, yellow, and black leaves, embroidered the outlines of the leaves and a bow in the Belgian colors and painted a lion in red, yellow, and black. The word “Merci” (Thanks) in ornate letters, is fully embroidered in satin stitch with red, yellow and black threads. The dates 1914-1915 are painted in red (inv. HHPLM 62.4.64).

Marthe Pander (Molenbeek-Saint-Jean 1902.07.19); in the family Léon Pander (Marcinelle 1874.06.05 – Woluwe-Saint-Lambert 1947.02.18) and Marie Jeanne Kersten (Molenbeek-Saint-Jean 1876.05.22 – Molenbeek-Saint-Jean 1907.06.22) there were three children, the middle one was called Marthe Fernande Victorine. Her mother died young, when Marthe was 5 years old. Father Léon Pander was a telegraph operator.
Marthe married Maurice Poulet, ingénieur commercial at Solvay (ULB); permission for their marriage was obtained in Woluwe-Saint-Lambert on May 15, 1939. On 1961.07.19 both were still alive. They lived at rue Général Lartigue 101, Woluwe-Saint-Lambert; in 1965 they had moved away.
Her flour sack is decorated from top to bottom with embroidery of swimming swans; a Belgian and American flag and the dates 1914-1915 in red, yellow, and black. A banner flutters with the text “Hommage aux Etats-Unis”. Marthe has signed her piece with the text: “Marthe Pander; Ecole Moyenne de Saint-Gilles-chez-Bruxelles; Classes préparatoires; 6e année d’études” (inv. HHPLM 62.4.128).

The class contribution from the Ecole Moyenne in Saint-Gilles, as a gift for the Belgian Relief, would have been sent to the United States via the American delegates of the Commission for Relief in Belgium.

Thanks to the compilation of all the items in the collection of the Herbert Hoover Presidential Library and Museum and the background information on the girls who decorated the sacks, we have gained insight into the work of a class of young students that decorated the flour sacks.

Saint-Gilles students’ contribution to today’s educational opportunities
The Consulate General of Belgium in New York shared this blog on social media. The consulate drawes a connection between the flour sacks decorated at school for charity and the Belgian American Educational Foundation Inc (BAEF). The BAEF provides scholarships for Belgian students to study in the USA, and for American students to study in Belgium; the fund was created in 1920 from the financial surpluses of the charitable contributions to the Commission for Relief in Belgium. 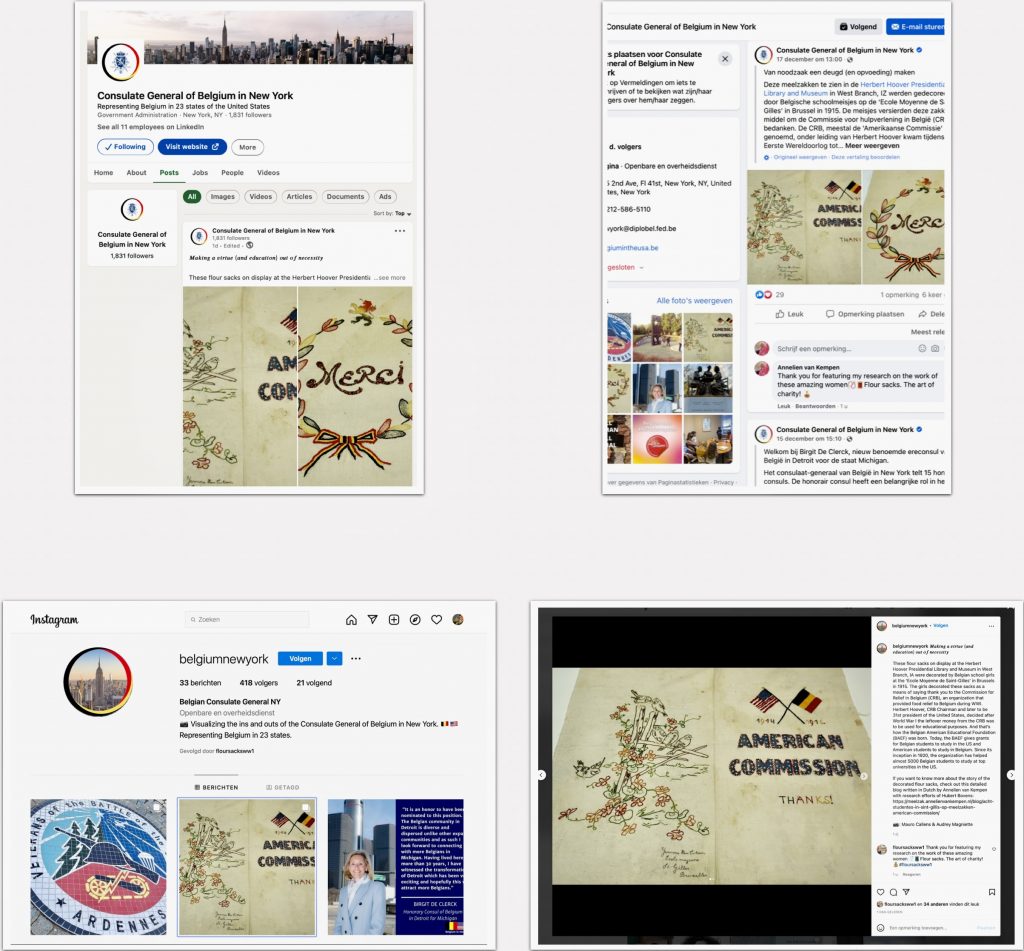 “𝑴𝒂𝒌𝒊𝒏𝒈 𝒂 𝒗𝒊𝒓𝒕𝒖𝒆 (𝒂𝒏𝒅 𝒆𝒅𝒖𝒄𝒂𝒕𝒊𝒐𝒏) 𝒐𝒖𝒕 𝒐𝒇 𝒏𝒆𝒄𝒆𝒔𝒔𝒊𝒕𝒚
These flour sacks on display at the Herbert Hoover Presidential Library and Museum in West Branch, IA were decorated by Belgian school girls at the “Ecole Moyenne de Saint-Gilles” in Brussels in 1915. The girls decorated these sacks as a means of saying thank you to the Commission for Relief in Belgium (CRB), an organization that provided food relief to Belgium during WWI.

When the first World War ended, the CRB had a leftover budget. As CRB Chairman, Herbert Hoover, who later became the 31st President of the United States, agreed with the Belgian government the money was to be used for educational purposes. And that’s how the Belgian American Educational Foundation Inc. (BAEF) was born. Today, the BAEF gives grants for Belgian students to study in the US and American students to study in Belgium. Since its inception in 1920, the organization has helped almost 5000 Belgian students to study at top universities in the US” (Consulate General of Belgium in New York, post Facebook, LinkedIn, Instagram, December 17, 2021).

Early crowdfunding: through their work the Saint-Gilles’ students of 1915 contributed to the educational opportunities of today!

Many thanks to:
– Hubert Bovens for his research into biographical data. I respect his work. He usually manages to solve huge and complicated puzzles in record time.

– Audrey Magniette and Mauro Callens; they sent me the photographs of seven of the eight Saint-Gilles’ decorated flour sacks with the students’ signatures.

– Tom Lundberg; he took the photo of Marthe Pander’s flour sack and posted it on Instagram.

– Evelyn McMillan; she succeeded to get digital access to The Northwestern Miller Fall 1914 editions (Minneapolis).

– Georgina Kuipers for her attentive corrections to the English translations of my blogs.